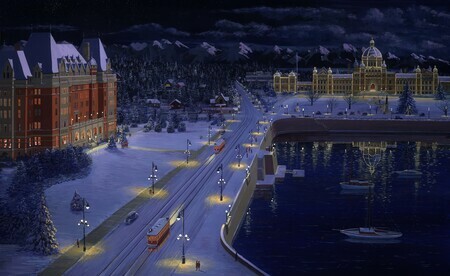 After many years of painting the history of the Lower Mainland and more recently, Vancouver I am pleased to be able to create my first painting of Vancouver Island. It has been a long time coming and I have many to thank for encouraging me to continue my re-creations of our heritage. Amongst those who have become familiar with my work are many with wonderful ideas for new paintings and I have been hearing a recurring theme from them: You really must paint Victoria!

Having visited Victoria a few times I was always struck by the intimacy of the downtown core and harbour. A walk along the seawall in front of the Empress Hotel leaves one in no doubt that you are right at the center of the City; it was here that I would begin. My usual routine is to scour archives and libraries for information and old photographs to work from. I was rewarded with many historical images and lots of history to read.

It has become something of a trademark in my painting career, to paint a single Christmas scene once a year; that image to be printed as my annual Christmas card. As I worked up my first drawings of Victoria I began the thought process of setting the season, time of day and sun angles. The more I thought the more I was drawn to the idea of rendering the painting as a Christmas scene. This, of course, may seem a rather unlikely idea as Victoria rarely has snow, but in my reading I found several occasions in Victoria’s history where large snowfalls occurred. A second influence in my decision making was reading that Victoria’s Legislative buildings have long been adorned with decorative illuminations. When I coupled all of this with my fondness for painting cosmopolitan night scenes, it meant that I could scarcely do other than a snowy Christmas evening painting; thus, it was very dark blue that formed the thick underlying base colour for this work.

First, I placed a line of convective clouds receding to the southeast having left behind a thick white coat of snow. I then situated the sun, just setting, on the southwestern horizon. This permitted me to employ the last glowing embers of light to cast a warm glow over Victoria, the stylish Empress Hotel and the Olympic Mountains to the south. I intended to create a moment of illuminated transition that it will only last a few minutes; soon it will be night.

As always, my brush strokes were guided by history and only later, after all researched sources were exhausted, did I employ artistic license to achieve a finished work. Thus it was that I made the decision to prune back the obscuring cloak of ivy and paint the Empress structures directly from original drawings and the earliest of photographs. As the painting neared completion, I let my imagination go as I “populated” the scene with cars, streetcars, boats, pedestrians, hotel guests and carolers. Uncharacteristically, I have not given this painting a date although it is undoubtedly in the late 1920’s as evidenced by the traffic driving on the right side of the road and the British Columbia Electric Railway (BCER) Streetcars in red and cream livery.

“A Capital Christmas” is essentially my Christmas gift to all who see it. As you tread beside our forefathers on the snowy sidewalks beside Victoria’s harbour sea wall, listen to the carolers in front of the Empress Hotel and marvel at the lights of the Legislative Buildings, I hope you find, a sense of time, place and tranquility.