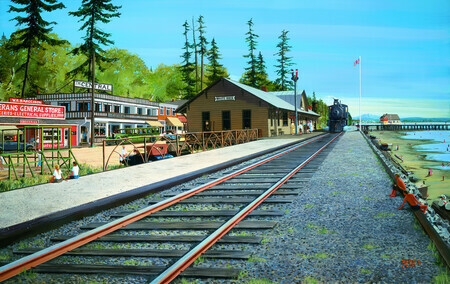 This south-facing stretch of shallow sandy beach has long been a perfect little place. Visit White Rock Beach just once and you are bound to visit again. I paint history and memories and it is my hope that I can take you back to a special time-past in White Rock.

To find just the right moment in time, I studied the history and development of White Rock. In doing so the historical elements narrowed my perspective down to a single year, 1929. This was the year before the beachfront fire of 1930 destroyed many of the original buildings near the station and this was also the year that the Legion Hall was dedicated at the base of the pier. Simply put, a painting of White Rock in 1929 would allow me to recreate a colourful and meaningful view of a White Rock that is fast receding from memory.

The framework of this painting will be familiar to anyone who has visited White Rock Beach. Most familiar is the Great Northern Station. GNR originally installed this line in 1909 as a new route to avoid the existing steeply graded 1891 route through Cloverdale. The first station on the beach was quickly replaced in 1913 by a larger depot that included customs and immigration space; it is this building that still stands today and is currently in use as a museum. I have painted the station in the authentic GNR colours for this era. Engine 1061, destined to be retired in 1933, is pulling in for the late morning arrival.

The familiar rock cribbing buttressing the GNR right-of-way was installed in 1929 to replace the original worn-out log cribbing. The line of rocks leads the eye to the 1611-foot long pier, completed in 1915. At the base of the pier, stands the brand new Legion Hall, a stunningly colourful addition to the beachfront and an important social center for White Rock. One can only imagine the dances and social events that must have been hosted at the hall. Fire, a common calamity of the times, claimed the building in 1935. Beyond the pier, with tiny touches of my paintbrush I created the White Rock on the beach and in the distance the Peace Arch.

Across Washington Avenue (Marine Drive) is the striking Central Hotel. Built in 1914, it provided stylish accommodation for visitors. A billiard parlor, ice cream parlor, dining room and for a short time a small general store outlet were amongst the many features of the The Central; out in front I parked the Pacific Stage Lines Coach, in 1929, owned and controlled by British Columbia Electric Railway Company (BCER). It has just arrived from New Westminster and will shortly leave on the return trip. The coach still wears it’s former Green Line livery despite the fact that BCER took control five years earlier.

Next door to the Central is the Veterans General Store, a long-time family business operated by W.R. Barge and Son. The store offered groceries, electrical supplies, hardware and generally everything.

Finally, the White Rock Tennis Club, formed in 1924, built a wooden-floored court adjacent to the station and later added a second court to the west in 1931. The courts were demolished in 1946.

In 1923 the paving of the Pacific Highway meant that folks could motor to White Rock on a whim and by 1929 White Rock must have been “the” place to go. Now you can be there too; just let your eyes do the exploring. The painting is as historically accurate as I could make it but I have used considerable artistic license to populate the scene with people and fun. In a final touch of the brush, I added the salt air; noon is approaching and as the Fraser Valley warms it has started to pull a light sea breeze from the southwest, unfurling the Union Jack. It’s 1929 and a perfect summer day at White Rock Beach is in the offing.