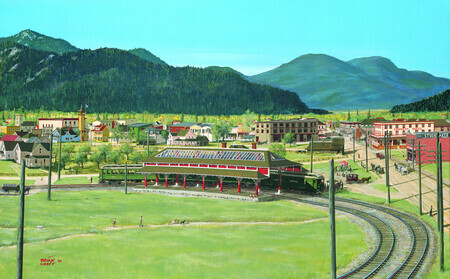 As early as 1858 Chilliwack Landing, located on the Fraser River at the western end of Wellington Avenue was served by steam driven paddle wheelers. For the early settlers, this was the primary link with the outside world, but each winter, the Fraser River froze and the paddle wheelers could not operate. In 1875 the Yale–New Westminster Wagon Road was built. This new road crossed Wellington Avenue creating an intersection dubbed “Five Corners” which became the centre for the thriving community of Chilliwack. However, the new road was little more than a treacherous, meandering, mud-flooded, dust-coated, glorified goat track; it was a hard push no matter how you tackled it. Yet it was nothing less than a highway to our pioneers who traversed that lonely length. Just about the only relief was in getting to the other end.

Transportation was always problematic for this remote breadbasket until 1910. It was in this year that the British Columbia Electric Railway Company (BCER) inaugurated interurban electric tram service from Vancouver through New Westminster, running south of the Fraser River and terminating at Five Corners in Chilliwack. The new interurban service, dubbed the Fraser Valley Branch, brought regular freight and passenger service at lower rates than offered by the paddle wheelers. Just as important, BCER’s electric overhead lines became the nucleus of the first major electrical power grid in the Fraser Valley.

In my painting Chilliwack – 1915, I try to capture Five Corners in these early glory years. My research was conducted with the assistance of the Chilliwack Archives staff. More than 75 reference photographs were consulted in the creation of the painting.

I chose to paint a late summer evening. The last interurban has just arrived at the stunning glass-canopied BCER station; an impressive town greets those arriving. On the far left of the painting is Cooks Presbyterian Church. Then, moving right is the large commercial Knight Block also known as The Opera House attesting to the large theatric hall upstairs. Then the Chilliwack Fire Hall built in 1908 dominates the skyline with its hose tower. The many commercial businesses along Wellington are painted as accurately as could be done. The solidly impressive Hart Block at Five Corners nearly eclipses Lillies General Goods, behind. Across Young Street, the brand new gray-stoned Bank of Montreal stands snug to the Barber Block, recently renovated to allow for the bank to be built. Cowen Drugs occupies the corner unit of the soon-to-be Irwin Block. The impressive Empress Hotel offers guests the finest and most modern accommodations possible. On the right, Earl Brett’s Garage sports a new Studebaker sign, evidence of an exciting transformation from a bicycle and wagon shop to automobile dealer; I placed a 1915 Studebaker driving up to the dealership, driving on the left as required by law before 1922.

Eventually research thins to a trickle and I must transition to imagination and artistic license. For instance we know that a BCER electric parade float/sales car visited Chilliwack in 1914 and so I parked it (painted it) behind the station. I added a small crowd in rapt attendance as a BCER salesman demonstrates the latest electrical technology: irons, toasters and light bulbs. I read of the Chilliwack Creamery, a company that by 1915 had acquired an electric ice-making machine and had commenced delivery service of cream, milk and ice cream to the town. Although no photographs could be found, I painted a typical delivery wagon into the scene. Finally I populated my painting with the good folks of Chilliwack: picking up milk cans, a family picking cherries, children heading off to fish, the Harrison House jitney leaving the station and people walking into town. There is much more but I’ll let you explore the rest of

Chilliwack, 1915 for yourself. -Brian Croft