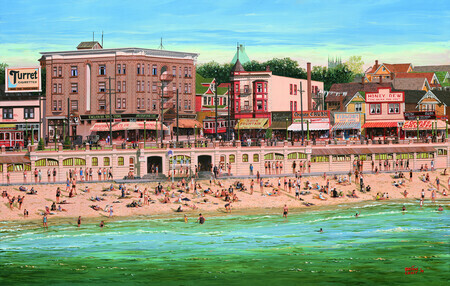 Vancouver’s English Bay, or First Beach as it was once known, is a beautiful waterfront. As late as 1911, much of the beachfront was privately owned. Maps dating back to 1887 clearly show subdivided lots extending onto the beach and these, of course, had become prime sites for private cottages and boathouses. Such was the popularity of English Bay that in 1898 B.C. Electric, introduced the Davie streetcar service, connecting downtown Vancouver with the beachfront.

My painting is of this stunning beachfront at a time of growing popularity and public pride. Let me walk you through the painting. Dominating the beach is the white concrete bathhouse built in 1909, a grand replacement for the original private boathouses. After thirty years of use, the bathhouse was converted in 1939 into a public aquarium and subsequently torn down in 1955. Behind the bathhouse on the left, Turret Cigarettes, originally produced by Ogdens of Liverpool, advertises out into the bay. Next door, on the corner of Denman and Davie, is the impressive Simpson Apartment Block with its intricate brickwork and architectural accents. It was built in 1919 to accommodate both apartments and commercial outlets, and by 1931 its sidewalk tenants included Safeway and English Bay Drugs. The two B.C. Electric streetcars negotiating the corner at Denman and Davie both sport #2 route signs which operated to capacity on sunny weekends. Rocky Roads ice cream can be found at the popular Dreyers. The eclectic jumble of restaurants and cafes lining Denman and Beach Avenue add a beach promenade atmosphere. At the far right, the Princess Pat Tea Rooms advertises “meals at all hours” and “pacific skinless wieners used”, a fine beachside eatery indeed.

The horizon is interrupted twice; the spire of St John’s Presbyterian Church is on the northwest corner of Broughten and Comox streets and farther away juts the roof of the new Hotel Vancouver. The hotel’s roof has just been installed but, paradoxically, most construction will be halted for the next dozen years while the Great Depression runs its course.

I populated the scene with Vancouverites, sun seekers, young and old. I painted folks sunning, swimming, playing, and gawking. I included a local Mafia dude, one of many that frequented the location, catering to smuggling and other shady business opportunities arising from Prohibition in the United States. To clothe all these people correctly, I researched mens and ladies beach wear in 1931 catalogues and this revealed surprisingly modern swimwear, much of which was produced by Jantzen Knitting Mills of Canada. Some men actually appear on the beach in full business suits but most were dressed in the new topless trunk style.

Despite the depression, English Bay was a great place to be in 1931. A short streetcar ride from the city, this picture-perfect day retreat could be afforded and enjoyed by most, and for a day at least, the worries of the times could be forgotten. After all, that’s why we have beaches, isn’t it?