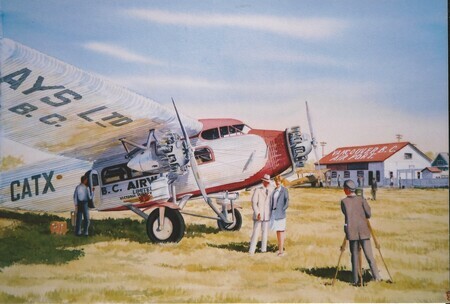 An original painting by Brian Croft

Artist's note. This painting incorrectly depicts the Vancouver Air Port Civic Hanger in the background however this building was not built until after the crash of BC Airway's Ford Trimotor, G-CATX

For twenty-six days BC Airways’ large modern Ford Trimotor airliner soared through the mid summer skies between Vancouver, Victoria and Seattle. Air express was booming; the rates were 39 cents between Vancouver and Victoria and 69 cents Vancouver to Seattle. 1293 passengers had flown with the company and 75% of these were from Vancouver or Victoria. Several changes to the schedule were made as the company tried to find the most efficient tri-city routing. In the August 6 schedule there was a noon and a 5:15pm departure from Vancouver. On Aug 22 another schedule was published showing departures from Vancouver at 9:30am and 5:15pm. On Saturday, August 25, the Trimotor, with twelve passengers onboard, took off from Vancouver at 9:20am for the short flight to Victoria.

On board, that day, was passenger Tommy Thompson a handsome, young man of twenty-four. He was going on a short one-week holiday and was seen-off by his lady friend, and future wife, Joy Nettley. Tommy and Joy both lived just blocks from each other in Kerrisdale and Joy, wanting to see Tommy off on this brand-new airliner, accompanied him on the short trip to the new airport where photographs were taken of the couple beside the Tri-Motor prior to departure. Several weeks earlier, Tommy’s parents, Thomas and Beatrice Thompson had taken the same plane to Victoria. It was, according to Tommy’s dad, “overloaded with businessmen, their luggage and golf clubs and had difficulty getting into the air”. Tommy’s mother, Beatrice was the only woman on the plane and “...showed a calmness which was not shared by the male passengers, who were gripping their seats with white knuckles”. Unimpressed, Tommy’s parents returned to Vancouver by boat.

In contrast, Tommy’s holiday got off to a great start on the pleasant thirty minute flight to Victoria. In the cabin were twelve passengers. Amongst them, Dr. Floyd D. Soverel from New Jersey and Mr. C. Crawford, a “country circulator for the Vancouver Sun”, were conversing. Soverel had just missed the morning train from Vancouver to Seattle and so he telephoned the BC Motor Transport ticket office which acted as agent for B.C. Airways asking them to delay their airport connector bus so he could catch the flight to Seattle via Victoria. He arrived at the BC Motor Transport Depot at Seymour and Dunsmuir at 8:45 am and purchased his ticket but this was so close to departure that there was no time to add his name to the passenger manifest which was then delivered to the aircraft pilot. En-route, he announced to Crawford across the aisle that he intended to stay on board in Victoria and continue on to Seattle. When Tommy stepped off the aircraft with Crawford and a few other passengers in Victoria, Dr. Soverel, remained on board. But there was a delay in the scheduled 10:30am departure.

The next leg was from Victoria to Seattle and the weather forecast was for low level sea fog. The pilot, Harold Walker, was very familiar with this route but the weather forecast and his lack of instrument training caused him to delay his departure from Victoria. Only five passengers were inconvenienced. It was later reported that one of the embarking passengers, a man of some stature, Alexander MacCallum Scott of Glasgow, former MP and aid to Winston Churchill, put pressure on Walker to fly. Citing Imperial Airways who flew in any weather, he was heard to say: “what’s the matter with you? Can’t you people fly an airplane?” Unwisely, Walker relented, loaded the plane and prepared for takeoff. Aboard that day were Walker and his assistant pilot Robert Lewis (Lew) Carson of Victoria. The five passengers were: Dr. Donald Booth Holden of Victoria a well known and highly respected physician who was going to Seattle to meet his son a forest patrol pilot for the Washington Aeronautical Corporation of Tacoma, Mr and Mrs. MacCallum Scott, Thomas E. Lake of Shanghai and Dr. Floyd D, Soverel,of New Jersey who was not shown on the passenger manifest. Seattle Mayor Frank Edwards was a no-show; he had a ticket for the flight but had to cancel his reservation due to business.

The bright, but hazy August day held no foreshadowing of trouble ahead as the Tri-motor climbed away from Victoria. Unseen, in the far distance ahead, lay the thick layers of low stratus cloud which had been forecast. Walker was an experienced pilot but he was not trained or qualified to fly in fog or cloud conditions and it was imperative that he keep the aircraft in clear air and in visual flying conditions in order to maintain spacial orientation and control of the aircraft. As he flew towards the Washington coast the weather conditions began to deteriorate and he was confronted with a classic aviation decision: either climb and fly on top of the cloud in visual flying conditions and hope that he could later find a hole or gaps in the cloud where he could descend visually to his destination, or alternatively, descend below the clouds or fog that he saw ahead in the hope he could maintain visual flight conditions to destination.

Walker, with an impressive 3000 flying hours and his considerable experience in flying boats, was familiar with such weather and would be accustomed to skimming the water at low altitude where, if the weather deteriorated further, he could simply land straight ahead on the water. His instincts would be that as long as he could find visual flying conditions below the cloud he would be able to proceed, however, the fact that he was flying a wheeled aircraft meant that he was actually flying into a trap. If, as he proceeded, the cloud base lowered to the water he would not be able to land on the water as a seaplane could, instead, he would be forced to turn around in a low level turn just above the water. The best and only alternative in this situation, to climb straight ahead through the cloud, was not available to him. Although the Trimotor had sufficient basic instrumentation to accomplish this safely, Walker with no instrument-based flying training was not capable of safely flying in or climbing through cloud. If he did attempt this, it was probable that he would have become spatially disoriented and lost control of the aircraft which could easily nose-up into a stall followed by a spin or spiral to the ground. The foggy jaws of the trap were set and as Walker flew into them it is likely that he tried to maintain visual conditions as long as possible. If he sensed that he couldn't make it through the weather his only option was to make a dangerous low-altitude 180 degree turn back towards the better weather that he knew was behind him. The state-of-the-art Tri-motor was a wheeled aircraft and the last place it should have been was skimming the waves in increasingly poor visibility; it did not arrive in Seattle but crashed into the sea killing all seven on board.

The photographs taken earlier in Vancouver that day of Tommy with his quick smile with Joy demurely beside him in front of the Trimotor are probably the last images of the aircraft before it disappeared. When Tommy heard about the disappearance of the plane and its passengers, he must have been shaken by the tragedy and he sent a post card to Joy:

“What the Hello Joy how are you, I guess you think I have a lucky streak in me with the plane not going down in the morning, I’ve been patting myself on the back ever since. Hey Wot. Wot? Don't forget I have a date on Sat with you? I’ll tell you what kind of a time I had here when I come back. From your friend Tom. T”.

Tommy’s post card to Joy was an important communication; Amidst the swirl of speculative and sensational news stories about the accident, it reconnected them. His “From your friend” sign-off, is a deception that hides his growing love for Joy who worked with her mother and sister in a Kerrisdale confectionary just a few blocks from his home. They would marry in the following year.