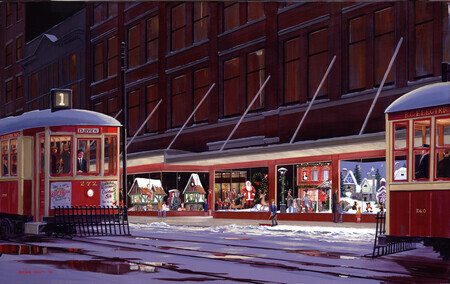 “Christmas Windows – Woodward’s on Hastings” belongs to my “Streetcars of Vancouver” collection. This collection brings to life the colourful and exciting story of the British Columbia Electric Railway Company (BCER) and its electrified streetcar and tram service.

The #1 Fairview line was the core of Vancouver’s Streetcar system for many years. The line served Vancouver’s two main business streets Granville and Hastings. Woodward’s Department Store on Hastings was one of the more popular stops; The enormous retail giant stood proudly in the midst of a vibrant and exciting business district.

Anyone who remembers shopping at Woodward’s will probably have vivid memories of the fabulous festive window displays that the store’s staff put in place as Christmas approached. Not only were the displays skillfully constructed but the magic of animation was used everywhere. Elves nodded and shook their heads, reindeer pranced, and small animals poked their heads out from all manner of hiding places. Lights twinkled everywhere adding to the fantasy. The windows were a major attraction in Vancouver and were always surrounded by families with children and the rest of us who suddenly felt young again. Those of us who saw these wonders carry them forever in our hearts.

Time has been unkind to Hastings Street, the streetcars and Woodward’s. Hastings Street, a once bustling center of commerce and entertainment, is today a sad graffiti-scarred shadow of its former self. Streetcars ended service on Hastings in 1955. The grand downtown flagship Woodward’s store closed its doors for the last time in 1993. The long line of display windows was boarded-up and the once elegant Woodward’s now gazes blindly onto Hastings Street. The Woodward’s windows were no more. The story twists onto a happier path when Canada Place Corporation purchased the Christmas window displays. Each year as Christmas approaches they are unpacked and carefully assembled for display at “Christmas at Canada Place” a special community holiday celebration.

My painting “Christmas Windows – Woodward’s on Hastings” is a partial fantasy because streetcars were withdrawn from service well before these particular window displays were built. Abandoning my traditional adherence to historical timelines I mixed equal portions of artistic licence, memories and Christmas spirit to create this image. It is of a special time and place that can only be found in the hearts of Vancouverites who saw Woodward’s on Hastings in the days of Christmas past.