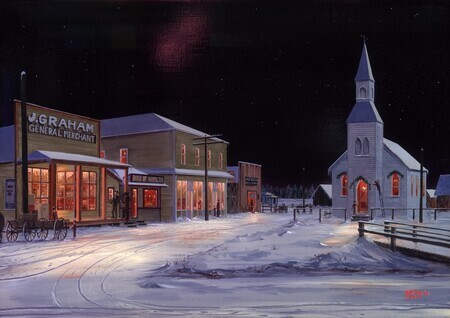 The earliest of footpaths wandered by this spot on one of the prettiest prairies in the Fraser Valley. The path was an important seasonal connection between the summer and winter villages of various groups of First Nations people. In 1824, the Hudson’s Bay Company’s exploratory expedition portaged across the prairie, travelling from the Nicomekl to the Salmon River in search of a site for a new trading post. The first Fort Langley was built three years later at what later became known as Derby Reach. So fertile was the land here that British military engineers conducted the first major survey of the prairie, thus formalizing the boundaries of the Hudson’s Bay Company’s Langley Farm. The centreline of that survey provided the central axis for a road (today’s Glover Road), which ultimately connected the Yale Road with Fort Langley. In 1886, local Methodist settlers erected a church here; its steeple was visible for miles around, and beckoned all to worship while providing a focal point for a new settlement.

In 1910, the British Columbia Electric Railway extended its Interurban Tram service from Vancouver and New Westminster to Chilliwack, thereby bringing rapid and reliable transportation to vast areas of fertile land. The railway followed the line of Glover Road from what is today the City of Langley before turning east near the hamlet of Jardine. Small stations were erected at existing settlements as well as other locations, with the stations spaced at approximately one-mile intervals. “Milner” was the name eventually assigned to the stop opposite the church on Glover Road. It was under this new title that the village there began to prosper. Within just a few years, a blacksmith’s shop, a livery stable, retail stores, a bank, a telephone exchange, a school and an impressive two-storied community hall had clustered near the church. Across Glover Road, the large depot-style Milner Station became increasingly busy.

While the rapid growth of Milner was being repeated near many of the BCER stations in the Fraser Valley, time would eventually arbitrate this growth in ways that could not be foreseen. Milner flowered and then slowly began to lose its petals. One-by-one the original buildings in Milner were moved, dismantled, or faded from view until finally only the church remained. Threatened on all sides by traffic and time, Milner’s church continues to remind us of the enterprise and tranquility of our pioneering past.

My painting, “Christmas in Milner, Langley – circa 1915,” reverses the ravages of time and returns the viewer to that snug cluster of long-ago buildings forever glowing warmly in a tranquil Christmas night.