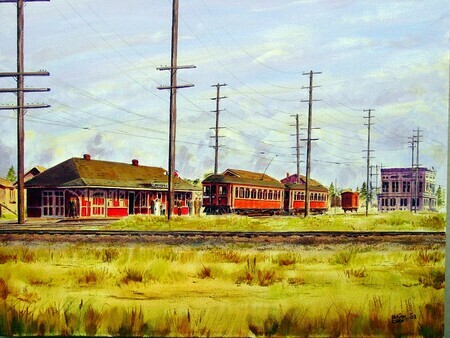 In May of 1908 the British Columbia Electric Railway Company (BCER) announced its intention to construct the Fraser Valley Branch a new line between New Westminster and Chilliwack .

The new line was a bold statement of faith that a prosperous future lay ahead for the Fraser Valley as Vancouver’s breadbasket. At the time the valley was poorly served by dreadful roads and a seasonal riverboat system on the Fraser River. Management at the BCER was gambling on a bright future and history would prove them right.

The rail bed was constructed, stations built and electrical infrastructure designed and installed. Five huge sub-stations were required to convert the electrical power into the 600volts DC required by the Interurban Trams.

A new improved class of rolling stock was needed and ordered. The long distances required certain refinements such as more comfortable rattan seats, headrests, toilets and even water coolers.

At Cloverdale the BCER located the first of several large stations (Depots). These facilities included baggage rooms, passenger waiting rooms, offices for BCER staff to sell tickets, manage freight and market electrical power in the adjacent area. The BCER arrival in the valley introduced not only rapid transport of people and goods but also heralded the arrival of electricity for domestic consumption.

Service commenced between Vancouver and Langley (Jardine Station) on May 4th 1910. Each day a “milk train” collected hundreds of milk cans from elevated platforms constructed opposite each station. In the evening the train returned with the empty cans (often filled with water for farmers so in need).

My painting is based on a 1916 photograph of the Cloverdale Depot. I have modified the date of the scene somewhat by converting the colour of the Interurbans from the original green livery to the more recent red and cream paint scheme. At the right side of the painting is the most westerly of the line’s imposing sub-stations.