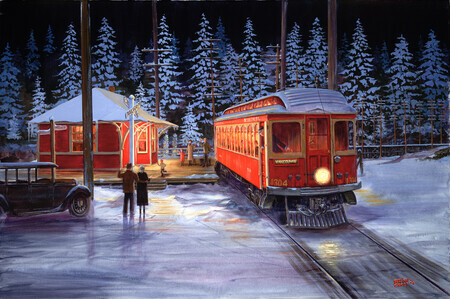 By 1900 the Fraser Valley was a sparsely populated area limited, in large, by poor roads and a seasonal riverboat service. Travel was more than a little difficult.

In 1910 the British Columbia Electric Railway Company (BCER Co.) initiated a new Interurban Tram service from Vancouver, through New Westminster, and up the Fraser Valley. For a short period the eastern terminus of the line was Jardine Station located in today’s community of Langley. Soon thereafter the line was extended all the way through Abbottsford to Chilliwack.

The Interurban brought regular scheduled passenger service. More importantly, the BCER Co. also integrated freight cars into the service, which made the efficient transportation of agricultural products possible. At the same time the electrified tramline provided electricity to the communities along the line. The marketing of electricity and electrical appliances was becoming an important component of BCER Co. business plan.

Stations were constructed at existing villages and otherwise at roughly one-mile intervals. Before long these stops formed the nuclei of many new communities. Stores and post offices opened nearby, new families settled the adjacent land and soon the valley flourished. The thin line of BCER steel became the backbone of the Fraser Valley.

My painting “A Christmas Reunion” depicts Jardine Station near Fort Langley on land now part of Trinity Western University. Interurban tram #1304 has just arrived from up-valley bringing a young family back home to Langley. In previous years the cold-white winters would routinely choke off long distance travel in the valley but by 1910 this had all changed. Tonight Grandma and Granddad wait beside the bright new Jardine Station and soon their reunited family will be snugly together for Christmas.