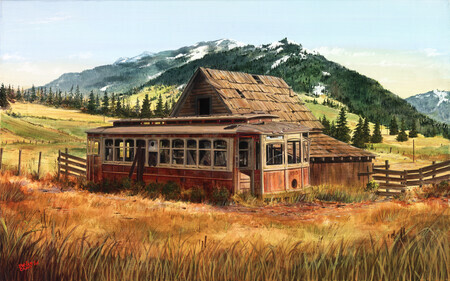 An original painting by Brian Croft

“Out to Pasture” was created as one of the paintings in my “Streetcars of Vancouver” collection. The collection is intended to bring to life the colourful and exciting story of the British Columbia Electric Railway Company (BCER) and its electrified streetcar and tram service.

BCER proudly introduced streetcar service in North Vancouver from the foot of Lonsdale on September 3, 1906. Eventually three lines were brought into service; the lines were named Lonsdale, Capilano and Grand Boulevard (later Lynn Valley). On February 28,1908 streetcar No.153 entered service. It was built by the John Stephenson Co. as a two-man double-ended car powered by four G.E. 67 motors of 38 horsepower each. The car had 40 rattan seats, a deck roof and was considered state of the art equipment, second-to-none in North America.

With the introduction of Lions Gate and Second Narrows bridges, the affordability of the automobile, road improvements, and bus services the demand for North Vancouver’s streetcars and the connecting ferry service dwindled. The last streetcar service was April 24, 1947. Ferry service lasted another eleven years, finally terminating in1958.

North Vancouver’s BCER rolling stock was dispersed in various ways. At least seven of the cars were purchased privately and shipped to Ruskin Hideout, to become self-contained housekeeping cabins beside the Stave River. Mysteriously car No. 153 was not amongst these. It came back into view in the 1960’s located in an alpine meadow near Ryder Lake, six miles southeast of Chilliwack. It seems car No. 153 first went to a dam site at Bunsen Lake and a year later appeared at Ryder Lake. There, a Mrs. James Hale “operated” No. 153 as a streetcar café for about four years following which the car appears to have been used as a chicken coup beside the old Voight cabin.

In the late 1970’s it was collected by B.C. Hydro. The corporation intended to restore No. 153 but this intention was never realized. The real rescue was started by the City of North Vancouver who purchased the car with the intent of restoring it for Expo 86 but that plan was not carried out. It took many more years but eventually by 1991, the wooden body of 153 was lovingly restored. Not surprisingly, it is said that only roughly 5 per cent of the original car remains. B.C. Electric’s streetcar No. 153 resides today with North Vancouver’s museum, the single remaining car of a proud regional streetcar service.

It is a wonderful reminder of a magic time when streetcars bravely conquered the steep corridors of North Vancouver. Brian Croft