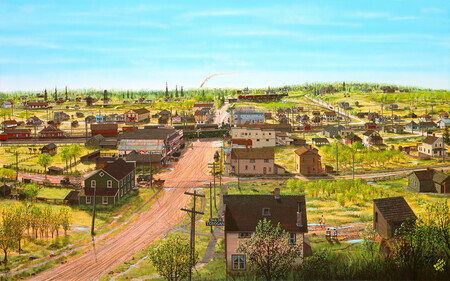 The land on which Abbotsford was to grow was impossibly pretty. The shallow wooded valley offered some hard-won farmland and the rest had been saved from the woodcutters saw by the absence of any viable means of moving felled lumber to mills. Things might have remained thus but for a most unusual twist of historical fate, for this tiny place was destined to host no fewer than four railways. The changes began in 1891 when Canadian Pacific Railway laid track from Mission south to the USA border and in so doing acquired a right of way through the valley by promising to build a station there; it was quickly named Abbotsford after Harry Abbott, the Western Superintendent of the CPR.

Up to this time, logging in the area had been mainly in the North along the Fraser River waterway which provided a means of towing or floating logs to mills. The village of Abbotsford had no waterways but just a few miles east of the CPR line was Abbotsford Lake which supported a modest shingle mill. In 1907 Joseph and Arthur Tretheway purchased the shingle company and expanded the mill, building a new kiln and sawmill at the western end of the lake to take best advantage of the large storage capacity of the lake. The following year, railway tracks were installed from the lake to the CPR line to transport raw logs and milled lumber; Abbotsford was ready to boom.

In 1908 the Victoria Vancouver and Eastern Railway (VV&E), backed by Great Northern (GN), commenced service up the Fraser Valley to Abbotsford. The GN station and its water tower were prominent features of Abbotsford for many years.

Then, in 1910, the British Columbia Electric Railway (BCER) penetrated from New Westminster to Chilliwack with its magnificent Fraser Valley Line electric interurban service. Entering town from the north, the BCER line was laid parallel and east of the CPR line; its depot stood on Hazel Street. The construction of the BCER Fraser Valley line required a great deal of lumber for rail ties, trestles and power poles and this encouraged the expansion of logging and many sawmills subsequently opened along this line.

My painting, Abbotsford - 1922 is rendered as a sunny spring afternoon at the apex of the lumber mill operations. These were prosperous years. Some 200 workers manned the mill and another 60 or so worked in the woods. The Abbotsford Hotel had just been updated and expanded. A new theatre had just been built on Oscar Street and a cenotaph had been erected in the middle of Essendene just west of the CPR line. Looking at the far left of my painting you will see the CPR station and sheds; behind that, the GN station and water tower. Departing westbound across the Essendene trestle, GN’s daily merchandise freight chugs away, running late which was not unusual; it normally left Sumas at 1:30pm to arrive at Guichon at 5:45pm.

By 1922 the mill, now reorganized as, the Abbotsford Lumber, Mining & Development Co. (ALMD) operated two Climax engines, No. 1 a 35 ton Climax and No. 2 at 25 tons, which I have painted crossing Essendene on its way to the lake. Finally BCER’s 2:26 westbound interurban is painted decelerating across Essendene into the Abbotsford Depot on the far right of the painting.

Abbotsford Village was situated at the bottom of a natural catchment and rainfall would cause considerable roadside runoff down Essendene often forming a temporary “lake” particularly in front of B.B. Smith’s Pioneer Store and so it was with great pleasure that I added that pigment. As for the rest of the

painting, I leave it to you to find the hundreds of tiny details that all contribute to make Abbotsford - 1922 come alive again.