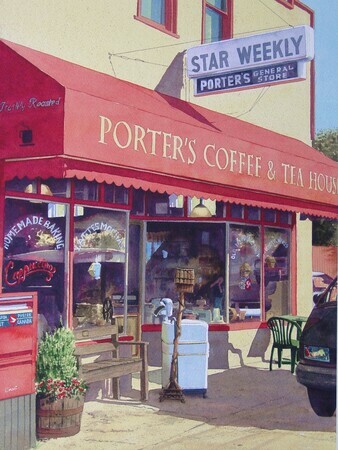 This old country store was constructed in 1939 and is the third successive general store to be built on the site. Over the years, Murrayville, originally called Murray’s Corners, has been home to a number of businesses, a butcher shop, several general stores, a ladies hat shop, a cheese factory, a toy factory, a garage, feed stores and others have all played bit parts in the story of this historical Fraser Valley five-way intersection. Of all these enterprises, only Porter’s Store survives today.

In recent years the old store was usually surrounded by an eclectic but colourful jumble of repaired lawn mowers; an eye-catching statement by the store’s equally colourful long-time owner, Eldon (Eldie) Porter and his passion for fixing things. You simply could not pass through the corners without taking a quick glance at Porters on “Five Corners”.

It was shortly before one Christmas that we heard Eldie had passed away. Soon afterward, I painted my sixth and seventh paintings of the store. That, I thought, was the last of it. But shortly afterwards Eldie’s daughter, Karen and her husband began to inject their youthful energy and imagination into the old store. It become, in their capable hands a new gathering place full of history, warmth and good-old-fashion Murrayville hospitality.

It was at Karen’s request that I did the very thing I thought I would never do, another painting of Porters Store. And so it was that I began looking at the store in today’s perspective, eventually finding a fresh new starting point for my brush as I laid pigment into Porter’s Coffee & Tea House.