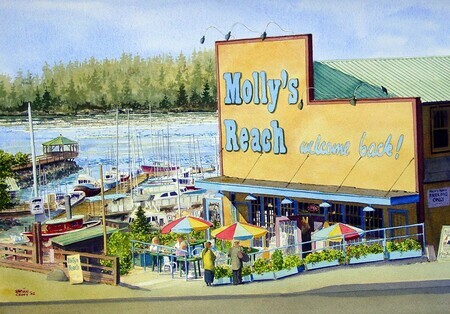 Located just a 40 minute ferry ride from Horseshoe Bay, Gibson’s Landing is one of the prettiest little towns in British Columbia and a great place to visit.

Lower Gibson’s offers a snug harbour. Located at the top of the wharf is the now-famous landmark, Molly’s Reach. The building dates back to before WW I. It has served a variety of purposes: grocery store, liquor store, furniture store to name a few but it was the CBC television series, The Beachcombers that really put Molly’s Reach on the map.

The Beachcombers was a popular drama series starring Bruno Gerussi as Nick Adonidas. Nick was a tireless adventurer who ran a salvage business in Gibson’s scouring the coast in his boat “Persephone”. Relic, Molly, Jessy, and Constable Constable were just a few of the regular characters who filled out the talented cast all-of-whom were regular patrons at the Reach. Molly’s Reach was the local coffee shop and hangout and served as the main anchor setting for much of the inside shooting for the series. The show ran for 20 years ending in 1991. One of the notable achievements of the series was to provide a training ground where countless new Canadian actors were to get their “big break”.

Molly’s Reach survives today as a popular restaurant and it’s trademark front façade is instantly recognizable to all who visit Gibson’s Landing. The Beachcombers was one of my favorite TV shows and so I painted this watercolour of the Reach with much affection. In a sense it is really a gift to myself; an artistic summation of the many pleasant memories of a great Canadian series that captured the hearts of so many.