295. Boat and Plane at Pender Harbour 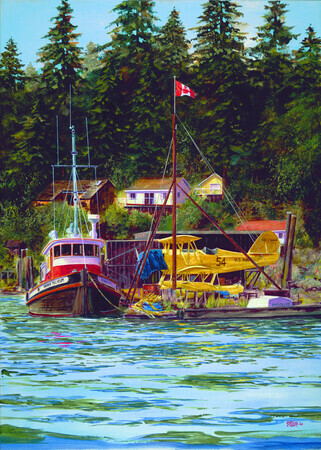 From an original painting on canvas by Brian Croft

I do a lot of my painting at Pender Harbour; this is a wonderfully secluded place where I do my best work.

At Pender Harbour I frequently crew with an old squadron mate on his sailboat during the weekly Saturday races. My squadron mate and I go back a few years. Together we flew the CF104 Starfighter on 439 Squadron at Baden-Baden, West Germany during the “Cold War” years. In those days we were bonded, as only fighter pilots can really understand, to our squadron and our squadron mates and these many years later he and I remain the best of friends.

Today we no longer cruise the ethereal mists of Bavaria in our knightly suits of the air. Instead we sail the beautiful reaches of Pender Harbour. We no longer fly at speeds exceeding Mach 2.0 but, since speed is a relative thing, we still enjoy the thrill that 8 knots can give a sailor when he is really trying to push a boat appropriately named “Starfighter”.

So there we were, on a Saturday, pushing Starfighter, when I saw a magnificent tugboat and an antique naval aircraft in a corner of Hospital Bay just north of John Henry’s store. I asked my old squadron friend to “put her in irons” and so he did without question as such is the trust between two old squadron mates. I was looking at an old tugboat and an old US Navy plane lying side-by-side; Even as I raised my camera to capture the moment, I sensed that I was looking at the “perfect painting”. Primary Reds, Blues and Yellows are the stuff of artists and I knew this was a painting that I had to do.

Normally I spend considerable time in researching the history of my paintings but in this case I released myself from that obligation and decided to simply painted what I saw as sheer happenstance; no history or detailed specifications, just the wonderful sight of a “Boat and Plane at Pender Harbour”.