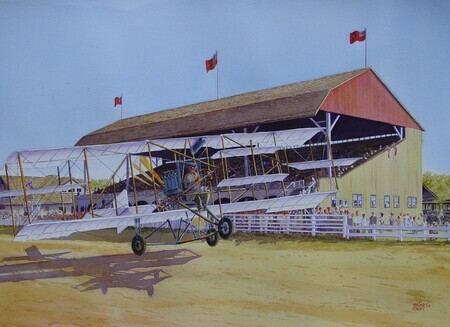 On March 25, 1910 Charles K. Hamilton lifted his Curtis pusher biplane gently into the air from the newly completed Minoru Park racetrack in Richmond. Some 3500 people were in attendance for the flying display. This, the first manned flight in Canada west of Winnipeg foreshadowed not only man’s eventual mastery of the skies but also a future that would see Richmond become the center of aviation on Canada’s west coast.

Hamilton’s flight was the first aerial show performed by the Curtis Demonstration Team. The Vancouver Province newspaper reported the event the following day in glowing terms:

‘’LIKE GREAT SEA GULL AVIATOR SOARS IN MID-AIR. With great courage, marvelous skill and a sea gull’s grace Aviator Charles K. Hamilton gave to the 3500 spectators at Minoru Park yesterday a daring and at times thrilling exhibition. It was the first ascension of a of a flying machine for most of the spectators and they appeared to enjoy the novelty as much as they admired the daring of the man-bird.’’

Some 250 feet was the altitude which the aviator reached yesterday and this after the accident and an hour’s delay in making repairs. Ten minutes after his heavier-than-air machine soared on its first flight in graceful curves, sweeping towards the grandstands, to the amazement of the crowd it suddenly swerved back to the middle of the field and plunged into the earth. Hamilton landed safely but considerable damage was done to one of the planes, while a tire was ripped from one of the wheels.

MADE QUICK REPAIRS. But here the aviator justified his reputation for courage of the kind seen only in men who play with clouds. Making such repairs as he could within the period of his spectators’ patience and with his machine still incomplete. The engine was again started, the propeller again buzzed, sending the coats of his assistants flying with the swift revolutions as they held the machine to earth. Vaulting to his seat Hamilton gave the front planes the slant which would catch the air and then like a giant sea gull the machine rose to the accompaniment of deafening cheers.

Away to the end of the park and beyond it, higher and higher and smaller and smaller it rose, then circled gracefully back toward the grandstand and over the judges stand, rising again in another circle round the track.”

In the years to come a small airport dubbed “Vancouver Air Port” was established in Richmond between (today’s) No.3 Rd and Garden City. Not until 1931 did the Vancouver Airport move to it’s current location on Sea Island.