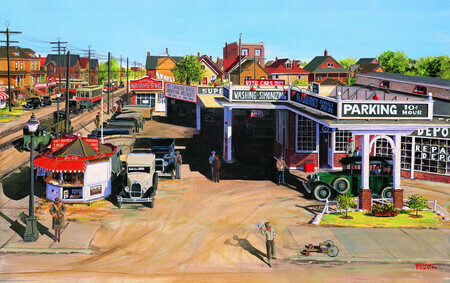 “Blackburn’s Service, Seymour Street – 1928” is one of the original paintings in my “Streetcars of Vancouver” collection. The collection is intended to bring to life the colourful and exciting story of the British Columbia Electric Railway Company (BCER) and its electrified streetcar and tram service.

When the first six brand new streetcars began operations on June 27, 1890, the only other city in North America operating electric streetcars was New York City. The first streetcar lines were installed and operated by fledgling companies, which were formed in rapid succession during the difficult early start-up years. First the Vancouver Street Railway Co, then the Vancouver Electric Railway and Light Co, New Westminster service was started by the Westminster & Vancouver Tramway Company and eventually Consolidated Railway and Light Company took over the combined financially troubled operations. New capital was eventually organized with the formation of the BCER Co. in 1897. Under the enthusiastic leadership of Robert Horne-Payne the newly formed BCER began to flourish marking the beginning of what was to be a new and long era of success.

Blackburn’s Service was located on the southeast corner of Seymour Street and Robson. The painting looks east towards down Robson to Richards. I wanted to capture the integration of streetcars with this busy downtown neighborhood. Two streetcars rumble and clang in opposing directions down Robson while a third emerges southbound on Richards. All this bustle is taking place in the midst of a well-treed neighborhood full of snug homes with laundry flying.

Blackburn’s was a large enterprise offering every type of automobile service imaginable. From new car sales to parking and storage; Blackburn’s had it all. $1195 is the sticker price on the new car in the foreground subject to the usual bargaining between the salesman and buyer.

As a final touch, to balance the foreground, I added a young lad selling newspapers. Artistic license drove me to also create a soapbox racer modeled after one that I built as a boy and from which I sold the Montreal Star many years ago.