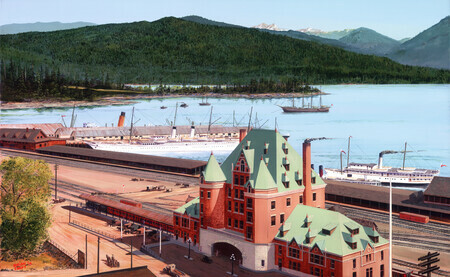 “Pacific Gateway, Vancouver - 1912” was created as one of the paintings in my “Vancouver Collection”. The collection to chronicles the colourful and exciting story of the history of Vancouver, British Columbia.

Three years after the 1867 Confederation of Canada, Sir John A. McDonald’s government, in order to encourage British Columbia to join Canada, promised a transcontinental railroad. After years of delay, construction eventually began. Finally, on May 23, 1887, the first CPR train from Montreal arrived in Coal Harbour at the foot of Howe Street. That same year Vancouver’s first, rather modest, CPR station and docks were completed, built on stilts set into the muddy shoreline of Coal Harbour. For the first time ships could dock in Vancouver at landing stages that were served directly by trans-continental rail.

In 1889 CPR signed a contract with the Royal Mail and subsequently placed orders for three new ocean liners. The Empress’ of Japan, China and India, each of 5906 tons, began trans-Pacific service in 1891. These liners carried 160 First Class, 40 Second class and 700 “Asiatic Steerage” passengers. CPR’s Pacific Gateway proved so successful that in 1908 the company built Pier A on top of imported Australian hardwood piles thus providing additional berthing for large ocean-going ships.

In 1899 CPR built a stunning new station that crowned the top of Hastings Street. Costing over $200,000, it was built in the CPR’s now famous brick and stone Chateau style designed by Edward Maxwell. Incredibly, this magnificent structure would stand for just fifteen years before being demolished to make way for a larger third station that still stands today.

In my 1912 painting, CPR’s Vancouver Station shines majestically in the early morning sun. The Imperial Limited has recently arrived from Montreal at 8:25AM. Hotel busses and jitneys are lined up and waiting. In a few years CPR will build Hotel Vancouver, yet another jewel in its Pacific service.

On the water Charmer is just arriving from Victoria and about to manoeuvre ahead of Princess Charlotte, already docked from Seattle. CPR’s gleaming Empress of Japan is docked and re-provisioning for its next Pacific crossing. The vessel on the other side of the dock is operated by the Union Steamship Co. of New Zealand and provides monthly service to Australia and New Zealand, via Hawaii and Fiji. A lumber schooner lies at anchor in Coal Harbour waiting to load.

These were truly Vancouver’s golden years. Not even the squatter shacks that line Stanley Park’s shore near Brockton Point can diminish the grandeur and elegance of Vancouver in 1912. A beautiful and now strategic city, Vancouver emerged proudly onto the world’s stage beckoning all to come and stay.