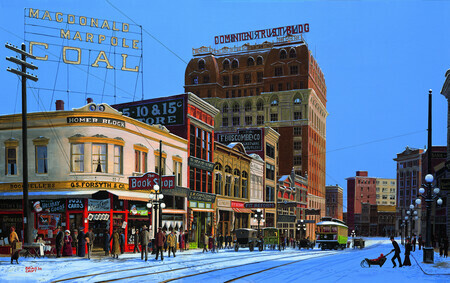 From an original painting byBrian Croft

“Christmas Shoppers, Hastings Street - 1913” belongs to my “Streetcars of Vancouver” collection which brings to life the colourful and exciting story of the British Columbia Electric Railway Company (BCER) and its electrified streetcar and tram service.

The #1 Fairview line was the core of Vancouver’s Streetcar system for many years. The line served Vancouver’s two main business streets Granville and Hastings. By 1913 Hastings Street was thriving. Vancouver’s Court House stood at the corner of Cambie and Hastings and from there stretching east and west were many of Vancouver’s most successful retail, professional and entertainment enterprises.

My painting looks east on Hastings from Homer Street. Across the street The Homer Block houses the G.S.Forsyth & Co. Book Shop as well as professional suites stairs. The snow-dusted sidewalk traverses an eclectic collection of retail outlets that provide Vancouver’s residents access to the latest goods imported from around the world. The grand Woodward’s department store is just out-of-sight around the corner. With the approach of Christmas BCER Streetcars tirelessly transport folks to and from this, the shopping center of Vancouver.

Time has been unkind to Hastings Street. Today, many sections are but sad graffiti-scarred shadows of former grandeur. Streetcars ended service on Hastings in 1955. The grand downtown flagship Woodward’s store closed its doors for the last time in 1993. It’s long line of display windows were boarded-up and the once elegant Woodward’s now gazes blindly onto Hastings Street along with many of it’s neighboring facades.

My painting “Christmas Shoppers, Hastings Street -1913” is of a special time and place in Vancouver’s history that can only be found in the fading memories of a few Vancouverites who were there. For the rest of us, all we have to recall the past are archived black and white photographs. Working from these old photographs, I placed pigment on canvas. This may seem like a poor substitute for faded history yet I hope that my brush strokes succeed in bringing Hastings Street alive once again. Perhaps you will feel crisp winter air, hear the rumble of the streetcars and suddenly feel the urge to cross to the other side of Hastings and join the Christmas Shoppers in 1913.