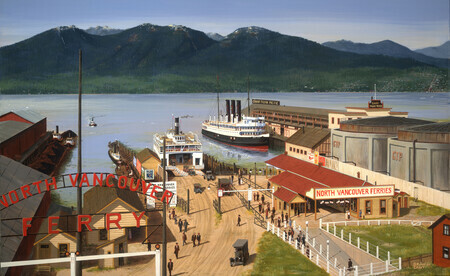 My painting looks down on North Vancouver’s south ferry terminal at the north end of Columbia Street in Vancouver. Ferry service started to North Vancouver on May 12 1890. For the next 68 years many ferries served on this route; in 1900, the North Vancouver, later designated Ferry #1commenced service, in 1904 the St. George later becoming Ferry #2, was introduced followed by Ferries #3, 4 and 5. In my painting the St George is in dock unloading cars and passengers; the automobiles in the painting are driving on left, as was the case prior to the1922 switchover to right-hand driving.

Pedestrian passengers are still arriving via the underpass from Columbia Street. The next load of cars is lined up out of sight on the overhead roadway. On arrival in Lonsdale, pedestrians will be able to board British Columbia Electric Railway (BCER) streetcars that will be waiting to take them to their destinations. BCER introduced streetcar service from the foot of Lonsdale on 3 Sep 1906. Eventually 3 lines were brought into service: Lonsdale, Capilano and Grand Boulevard (later dubbed Lynn Valley).

On the right of the painting, the Grand Trunk Pacific (GTP) dock stands proudly behind bunker oil tanks installed in 1912. The GTP ship Prince George is in dock loading for its continuing cruise up the west coast of British Columbia. The Prince George and sister ship Prince Rupert were the latest in luxury travel. Launched in 1909 and 1910, the identical steamships were 320 feet long and carried 200 first class passengers and 36 in second, however, on excursions, they could accommodate 1500. These ships ran a “triangle” service with alternating departures from Seattle every Sunday and Wednesday; then they stopped at Victoria, Vancouver, Prince Rupert and Stewart. A seven-day cruise on these ships was advertised at $48 all inclusive. Prince George ended its long career in 1948 when a fuel tank exploded and the ship burned.

Although operations continued, GTP fell into receivership in early 1916, having been crippled by debt. In the following year, 1917, its arch-rival, Canadian Northern, also in financial trouble, was taken over by the Canadian government. Eventually Canadian Northern was renamed Canadian National Railway (CNR) and in later years this new entity took over operational control of the GTP rail and steamship assets.

Just to the left of the North Vancouver ferry slip is the modest West Vancouver ferry terminal, which offered pedestrian-only service to Ambleside. At the far left of the painting is a portion of the Evans Coleman & Evans deep-sea wharf. Evans Coleman & Evans was the largest fuel and cement supplier in Vancouver. Coal barges are loaded and ready for tow, many of them being dispatched to supply the fuel and heating requirements of North Vancouver.