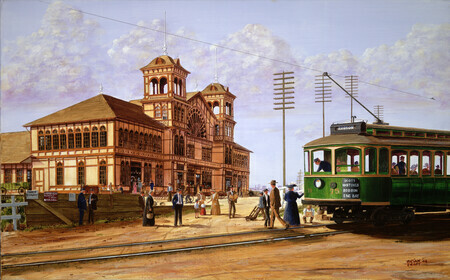 “Vancouver Public Market – 1908” is one of the original paintings in my “Streetcars of Vancouver” collection. The collection is intended to bring to life the colourful and exciting story of the British Columbia Electric Railway Company (BCER) and its electrified streetcar and tram service.

The market was located just north of 1st Avenue and just west of Main. It was built on pilings driven into the bed of False Creek and faced East onto Main Street. Streetcar service on Main Street stopped adjacent to market. The market was a grand building complete with a market restaurant and generous skylights and windows. It was 150 ft. wide at the front and housed 92 stalls for vendors, many of which were supplied by produce brought down the Fraser River by the Steamer “Stassa”.

Construction of the market was completed in May 1908. Subsequently it was necessary to move the building back “several feet” to make way for the new Main Street Bridge. 3000 people attended the Grand opening of the market on August 15, 1908. A fire destroyed the structure on November 10, 1925.