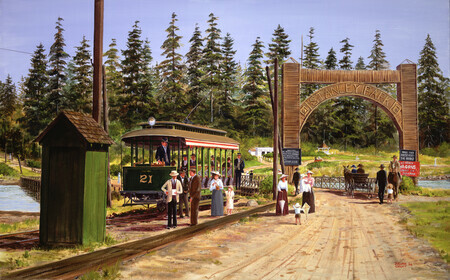 “Stanley Park – 1900” is one of the original paintings in my “Streetcars of Vancouver” collection. The collection is intended to bring to life the colourful and exciting story of the British Columbia Electric Railway Company (BCER) and its electrified streetcar and tram service.

When the first six brand new streetcars began operations on June 27, 1890, the only other city in North America operating electric streetcars was New York City. The first streetcar lines were installed and operated by fledgling companies, which were formed in rapid succession during the difficult early start-up years. First the Vancouver Street Railway Co, then the Vancouver Electric Railway and Light Co, New Westminster service was started by the Westminster & Vancouver Tramway Company and eventually Consolidated Railway and Light Company took over the combined financially troubled operations. New capital was eventually organized with the formation of the BCER Co. in 1897. Under the able leadership of Robert Horne-Payne the newly formed BCER began to flourish marking the beginning of what was to be a new and long era of success.

Few places in Vancouver are as well known as the 960-acre Stanley Park, which opened in 1888. This painting depicts the wonderful entry arch in existence at the turn of the century. Streetcar service commence to Stanley Park in 1895 via the Robson line. In 1896 Consolidated Railway Co. lobbied to provide service into the park but the City rejected this plan. In 1897 the Pender Street line was extended to the park entrance where a streetcar loop was eventually installed.

My painting “Stanley Park – 1900” is derived from a period photograph showing Streetcar # 21 at the park entry. Streetcar #21 was built in 1897 by Canadian General Electric and featured an open car design, which was to be short lived; In 1911 the Railway Ministry was formed and open cars were no longer permitted. The motorman and conductor made 40 cents and day worked between 10 and 11 hours a day.

In addition to the bridged causeway serving the park entry there appears a second trestle behind the streetcar. This was probably to serve a 12-inch water main, built in 1888, to bring the city’s water supply across First Narrows through Stanley Park and across lost lagoon.

Traffic control was already an issue as the many signs attest; some things never change!