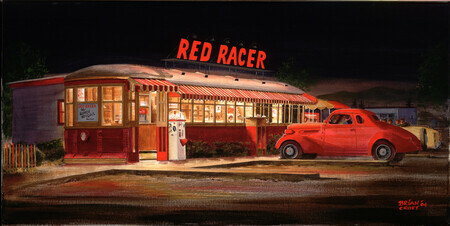 “Red Racer Diner, Penticton – 1960’s” is one of the original paintings in my “Streetcars of Vancouver” collection. The collection is intended to bring to life the colourful and exciting story of the British Columbia Electric Railway Company (BCER) and its electrified streetcar and tram service.

There is a beginning and an ending to most human endeavours. The streetcars of the BCER were eventually destined to become obsolete and as time advanced most of these wonderful old workhorses were systematically demolished. A few however escaped this fate. Some were purchased by other streetcar systems in North America and a few found their way into private ownership. One of these wound up as a diner in Penticton. The owner, Jack Lawrence, named it The Red Racer and, in later years, would often explain how he got it: “I went to a party, took a streetcar home, and never returned it.” Jeanne Boyle of Penticton wrote to me about her memories:

“The Red Racer sat for many years at the corner of Main Street and Huth Ave. it was owned by Jack Lawrence. We have a photo of Jack standing in front of the place. It was there in the 1950’s and I think may have lasted until aproximately 1962 or 63. I personally ate there on many occasions. It was a treat when my folks went to the Pines Drive Inn Theatre a mile father south down Main, to have something there before the movies. I also remember the Orange Crush ice cream floats on a hot Okanagan Day. The Red Racer was set off the street in a grove of cotton wood trees, and about 100 feet north of the creek, separated only by Huth Ave., which in those days was but a small lane headed west bound for the river. Huth was also known as Lover’s lane, for after a trip to the Red Racer one could take their sweet heart in the back of an old jalopy down the cool lane for a “snuggle”.”

I painted “Red Racer Diner” from a single black and white daytime photograph. I made the decision to render the painting as a night scene and enlarged the rooftop “Red Racer” sign for emphasis. It was not until mid-way through the painting that I realized that the black and white photo showed nothing but black in the windows and I would therefore have to invent the entire interior detailing so that it could shine through the windows into the night. I had a lot of fun making this painting work and I hope you will share the feeling that I get when I look at it… to slow down and pull into the “Red Racer Diner” for a burger and fries.