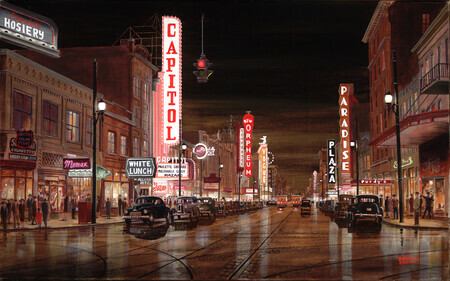 (Print sold out, enquire at galleries about secondary-market availability)

“Theatre Row, Granville Street – 1948” is one of the original paintings in my “Streetcars of Vancouver” collection. The collection is intended to bring to life the colourful and exciting story of the British Columbia Electric Railway Company (BCER) and its electrified streetcar and tram service.

My painting, “Theatre Row, Granville Street – 1948”, originates from a daytime photograph of theatre row. The reference photo was labeled 1939 however I was bothered by the more modern look of the automobiles; for instance it seemed to me that a 1942 Plymouth was parked across street. To resolve the matter I researched the movie “Hazard”, showing at the Capitol, and found that the movie was actually released in 1948 starring Paulette Goddard and MacDonald Carey. I have titled the painting accordingly and added a number of other movie titles from 1948 to the various marquees.

I painted the scene as an early evening at just about the start time for the early movie sitting. This allowed me to light up the theatre marquees and play them against a brooding night sky. A recent shower has just passed leaving the Granville Street pavement shimmering with mirrored reflections. Two Streetcars work in opposing directions down Granville Street bringing more people to the heart of Vancouver’s entertainment district.

A painting like this can be a daunting undertaking. So many big and little decisions such as choosing colours, filling in the gaps with details which the camera missed and adding lots of people to the sidewalks at the ticket booths. I applied pigment and artistic license in equal proportion to achieve the look that I wanted. A simple question tells me whether the painting works… Can you smell the popcorn?