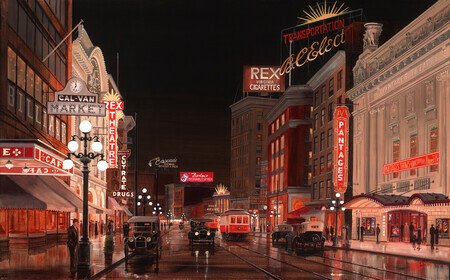 “Theatre Row, Hastings Street -1926” was created as one of the paintings in my “Streetcars of Vancouver” collection. The collection is intended to bring to life the colourful and exciting story of the British Columbia Electric Railway Company (BCER) and its electrified streetcar and tram service.

Such was that success that a new BCER depot and head office was constructed in 1912 at the corner of Hastings and Carrall. This impressive five storey brick and terra cotta building at the middle right of my painting accommodated two interurban tracks through its ground floor portico. BCER managed not only its transportation system from this building but also an expanding delivery system for electrical power and electrical appliance sales. The location was pretty much the center of things; Hastings was the first Vancouver street to be paved and the intersection of Hastings and Carrall was, in 1928, to sport the first traffic light in the city.

Theatres dominated the night streetscape. The Rex Theatre gleamed with hundreds of light bulbs affixed to its façade. The magnificent Pantages Theatre, easily the most impressive floodlit façade, would later be named the Beacon and Odeon Hastings. The Brunswick, Columbia, Crystal, National, and Princess all offered electrified competition. I chose to adorn the Pantages with film posters from 1926; now showing: “Son of the Sheik”, starring Rudolph Valentino. Coming Soon: “Flesh and the Devil” and “Don Juan”, starring John Barrymore.

Two streetcars, resplendent in their new red and cream livery, are navigating this busy route. These fine machines are, in 1926, the lifeblood of the Hastings business and entertainment district and their operating parent, the BCER Company, is literally in the process of electrifying Vancouver. Today little remains to remind us of this glorious past, and so I did what artists do; I painted this scene as a romantic instant in time when a streetcar ride and a couple of dollars provided a fine night out in the great emerging city of Vancouver, B.C.