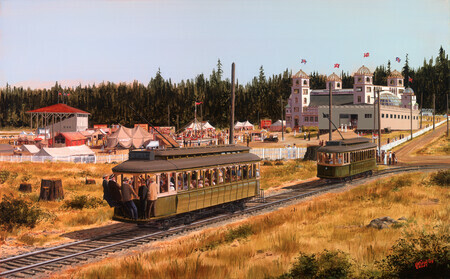 “Vancouver Exhibition - 1910” belongs to my “Streetcars of Vancouver” collection which brings to life the colourful and exciting story of the British Columbia Electric Railway Company (BCER) and its electrified streetcar and tram service.

In1889 Vancouver acquired 160 acres for use as a natural park much like Stanley Park. Called Hastings Park, it was quickly put into use by the Jockey Club who obtained permission to build a racetrack. In 1908 the Vancouver Exhibition Association amid much controversy and opposition formulated plans to use Hastings Park for a new annual fair. A major selling point for the new Vancouver Exhibition was that it was to be just a five-cent streetcar fare from downtown. Prime Minister Sir Wilfred Laurier performed the opening ceremonies for the grand opening in August of 1910 with 5,000 people in attendance; 68,000 people attended the exhibition in the first year.

The first main exhibition building at Hastings Park was built at a cost of nearly $37,000. Called the Industrial Building, it was 240 feet long and 100 feet wide. It had an arched roof with glassed end sections permitting a bright interior; the exterior was decorated in white and gold paint. The Industrial Building proved to be a lavish and inviting nucleus for the exhibition accommodating entertainment, displays and refreshments under one roof.

In my painting “Vancouver Exhibition – 1910” BCER streetcars are about to drop fairgoers on the corner of Renfrew and Eton at the northwest corner of the park. The Industrial Building is visible on the far right. Nearer, is the Manufacturers Building. In the middle of the painting a primitive midway offers thrills and rides and a jumble of tents and stands make up the arcade where all manner of entertainments are available. On the left in the distance is the grandstand facing the racetrack soon to be patronized by the four impatient “risk-takers” hanging onto the back of the overloaded streetcar.