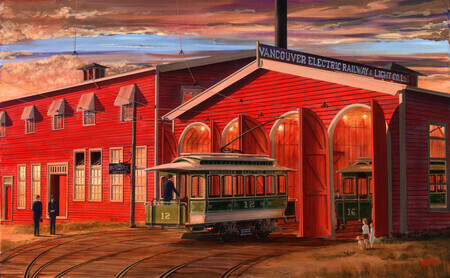 “The Old Street Car Barn - 1894” was created as one of the paintings in my “Streetcars of Vancouver” collection. The collection is intended to bring to life the colourful and exciting story of the British Columbia Electric Railway Company (BCER) and its electrified streetcar and tram service.

The original electric streetcar barn was located on Barnard (Union) just west of Westminster Avenue (Main) on the north side of False Creek. The Barn accommodated eight streetcars, which entered and exited the through four arched wooden bay doors, which faced south. Immediately west of the barn was the Power Plant. Cordwood and later coal was used to raise steam that generated the electricity to drive the cars. Electricity was also sold. Shortly after commencing streetcar service the company introduced arc lamps in Vancouver.

In my painting “The Old Street Car Barn – 1894” I wanted to capture the late-evening activities as the streetcars are returned to the “barn” after a busy day’s work and so I placed the sun low on the western horizon and used deepening values to create the mood. Soon, the lighting will reverse completely as the new-fangled electric lights, already beginning to gleam inside the barn, replace the glare of the retiring sun.

The crews have opened all the doors and one-by-one the cars are being carefully parked for the night. Streetcar no. 12 has just left the mainline on Westminster Avenue (Main) and is being carefully guided into the barn by its conductor. The lettering on the side of the car reflects the recent change over from “Vancouver Street Railway Co.” to “Vancouver Electric Railway and Light Co. Ltd.” A young boy and girl who can scarcely imagine where the future will lead watch in fascination, witnesses to a wondrous moment of change in Vancouver