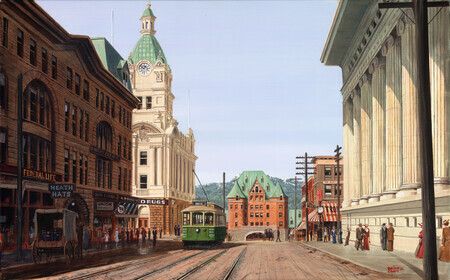 “Top of Granville Street - 1912” belongs to my “Streetcars of Vancouver” collection. This collection brings to life the colourful and exciting story of the British Columbia Electric Railway Company (BCER) and its electrified streetcar and tram service.

The core of Vancouver’s Streetcar system for many years was the Fairview line, which served Vancouver’s two main business streets Granville and Hastings. My painting shows the breathtaking vista at the top (north) end of Granville looking towards the North Shore Mountains. A streetcar is moving north on Granville and about to make the right turn eastward on Hastings Street.

On the left is the brownstone Williams building which housed Federal Life, the Union Steamship Line, and H. McDowell’s Drugs. Farther along on the left is the impressive new Post Office (Sinclair Centre today) just completed in 1910. Crowning the top of Hastings is the stunning CPR Station. This, the second station, was built in 1899 in the CPR’s famous Chateau style. Incredibly it will stand for just another two years before being demolished to make way for the larger third station that still stands today. On the Northeast corner of Granville and Hastings stands the Haddon Block. In the lower corner retail space Trorey’s Jewellers, widely regarded as Vancouver’s premier jeweller and watchmaker, has recently sold out to Birks. On the sidewalk stands Trorey’s massive iron clock. In 1913 Birks will move to its new store at Granville and Georgia and the (now) Birks clock will move along with the store.

Towering on the near right stands the classic-columned Bank of Commerce built in 1906. The massive design was intended to impress the bank’s customers and it also helped the structure survive the test of time. In 1994 Birks moved into this building. Of course this meant that the Birks clock was moved, once again, this time returning to the sidewalk just across the street to the South from its original location.