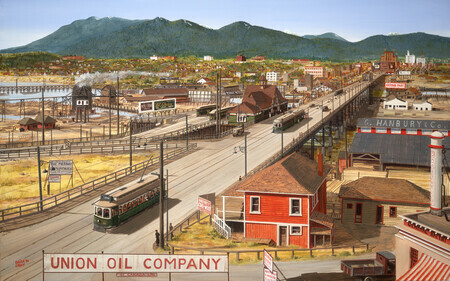 “Granville Street Bridge - 1921” belongs to my “Streetcars of Vancouver” collection which brings to life the colourful and exciting story of the British Columbia Electric Railway Company (BCER) and its electrified streetcar and tram service.

As Vancouver grew so did the BCER streetcar and interurban system. In 1906 the Second District Lulu Island Interurban Line was opened to Steveston. For the next fifty years the Lulu Island Line transported local residents, freight and farm products from Lulu Island to Vancouver. Originally the line terminated at a depot below the north end of the old Granville Street Bridge where passengers transferred onto the downtown lines.

The growth of Vancouver to the south, up the Fairview slopes, overlooking False Creek, rendered the original 1889 Granville bridge inadequate. In 1909 a new steel “High Level” Granville Bridge was opened by the Governor General, Lord Grey. The bridge’s concrete pylons spanned False Creek’s tidal flats, then known as the Granville Island Sandbars.

On May 10, 1914 a new Lulu Island Line station and depot opened. It was a truly beautiful mock Tudor style structure built on pylons immediately beside the new bridge. The Lulu Island Interurban would disgorge its passengers on the west platform and passengers would walk through the station breezeway and onto the bridge roadbed where they boarded the next car on the Fairview line.

In 1915 the potential of the muddy Granville Island Sandbars beneath the bridge were realized; Vancouver’s Harbour Commission paid the Federal Government $1 for the flats and quickly commenced the construction of a 1 mile-long timbered bulkhead around the tidal bars. Pacific Dredging then pumped over 1 million cubic yards of sea mud behind the bulkheads. By 1916 Granville Island stood a solid 10 feet above the high water mark. Granville Island cost $342,000 to create and within a very short time it was completely rented out to various industries.

My painting, “Granville Street Bridge – 1921” captures BCER’s Lulu Island Line Station at it’s zenith with a thriving Granville Island below. Behind, the city of Vancouver basks in the late afternoon sun. 1921 was the last year of left-side traffic. Eventually, increased congestion, as passengers fought traffic to board the streetcars, caused the City to request the removal of the station. It closed on December 1, 1923. The bridge itself later became much hated; referred to as “the bottle-neck” and “the killer” it was eventually replaced by the third and current structure.