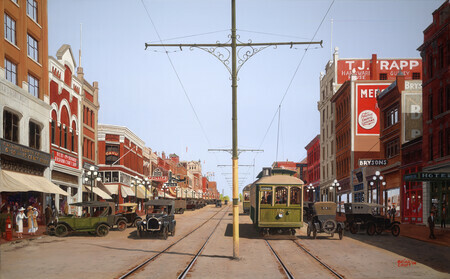 “Columbia Street, New Westminster - 1924” belongs to my “Streetcars of Vancouver” collection which brings to life the colourful and exciting story of the British Columbia Electric Railway Company (BCER) and its electrified streetcar and tram service.

It was the Westminster Street Railway Company that first provided streetcar service in the Royal City and then, through its subsidiary the Westminster & Vancouver Tramway Company, went on, in 1891, to build the first interurban line to Vancouver. Although these lines were eventually incorporated into the BCER it illustrates the progressive and forward thinking of the city of New Westminster in those early years.

From its inception New Westminster was well sited and well planned. Colonel R.C. Moody of the Royal Engineers designed, planned and surveyed a beautiful and functional city. The steeply sloped site of the city was a strategic military choice in that it was easily defended from attack from the south. In later years the city’s location became agriculturally strategic as it evolved into a service center and market place for the burgeoning Fraser Valley. Simply put, New Westminster was second to none. It was connected, via the CPR, to the rest of Canada. The City boasted an excellent water works system, electrical generation plant, an extensive array of retail and industrial business’, and of course a streetcar service. For the new settlers in the Fraser Valley this was indeed the center of their universe.

My painting captures Columbia Street on a sunny afternoon in 1924. This is probably one of the most modern streetscapes in Canada at the time; the cluttered overhead electrical services have been relocated underground, the streets paved, salmon coloured sidewalks laid and stylish street lighting installed. The BCER service is powered by overhead lines supported by elegant street stanchions running down the center of the street. In 1924 Columbia Street simply bustled and would in later years acquire the mantle “The Golden Mile”.