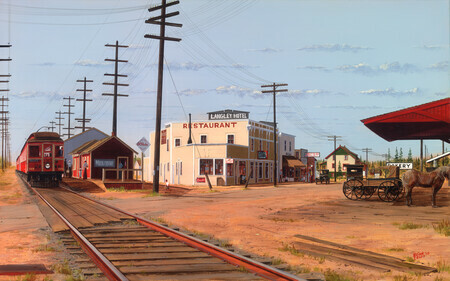 Long before it became a crossroad, this spot was one of the prettiest prairies in the Fraser Valley. A path wandered by here; it was an important seasonal connection between the summer and winter villages of various groups of First Nations people. Later Yale Road was pushed up the Fraser Valley and as it passed through the broad prairie it crossed the old path and also connected with Trunk Road, (today’s Glover Road), which traversed northeast towards Fort Langley. A few hardy pioneers, amongst them Adam Innes and his family, homesteaded the land and before long the intersection became known as Innes Corners.

In 1910, the British Columbia Electric Railway extended its Interurban Tram service from Vancouver and New Westminster to Chilliwack, thereby bringing rapid and reliable transportation to vast areas of fertile land. The railway intersected Yale Road at Innes Corners, adjacent to Glover Road. The crossroad that resulted played host to a new era of confidence and growth; and so it happened that the former hamlet of Innes Corners began its transformation into the village of Langley Prairie.

My painting “Crossroads at Langley Prairie – 1928” looks west down Yale Road from the BCER crossing and captures a bustling Langley Prairie. Just eighteen years have passed since the opening of the BCER Fraser Valley Line and already the crossroad is showing it’s potential as a center of growth. Several hotels, numerous stores and businesses have located here and brisk real estate sales reflect a growing interest in the area. Tragically “The Great Fire” of Langley Prairie swept through this scene on May 21, 1928, and destroyed most of the buildings in this view. Only the “Apartments” in the distance and the Vancouver Milling and Grain Company’s outlet in the foreground on the right were spared.

Today, old Langley Prairie lives again on my canvas. Interurban tram number 1304, leading a two car special enroute to Chilliwack, is resting at the station platform. Folks are climbing on board for the run up the valley. The Langley Hotel is open for the breakfast trade and a contented patron reads the paper outside. Next door Sam Brown’s Billiard Parlour and Barber Shop has just opened. Beyond is McLean’s Dry Goods; Bill McLean is seated on a stool painting the new store name, Pioneer Dry Goods, perhaps reflecting the long-held belief that this was the building that housed the first general store at the crossroad operated by Alphonse Prefontaine. Next-door Wilf Derocher, owner of The Langley Tire Shop, is giving directions to a passing motorist while his three-year-old son, Raymon watches. Raymon is standing beside an automotive water can, one of his favourite playthings. On May 21st Raymon will narrowly escape death when pulled from his crib just moments before the fire destroyed his Dad’s shop and home in the rear. Out of view beyond the tire shop are Fred Pollards Plumbing, J.E. Morris Grocery, Pete Prytherch’s Shoe Repair and finally the “Apartments” shine in the morning sun.

I have painted in just a few of the industrious folks who built Langley Prairie. When the town burned they returned and built it up again. Such was the magic of this simple crossroads that people continued to arrive here. They built homes and business and eventually, in 1955, Langley Prairie became The City of Langley. In 1995 the City created a Coat of Arms. A large replica of the Coat of Arms was placed in the pavement at the center of the crossroads, the very heart of this place. -Brian Croft