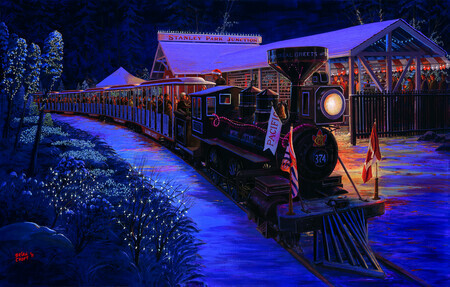 For more than a century, Stanley Park has provided Vancouverites and visitors with a natural park of unparalleled beauty. Offering more than a beautiful west coast park, this refuge, has a wide range of activities that can be enjoyed by the whole family. Not the least of these is the Stanley Park Miniature Railway, a wistfully-meandering mile and a quarter long journey through tunnels, over trestle bridges and past lakes and streams.

The beginnings of this little railway can be traced as far back to 1904 when Park Board meeting minutes record a note stating "Application to establish miniature pleasure railway in Stanley Park turned down”. As chance would have it, in the 1940’s, Provincial Chief Engineer, John Armstrong built a miniature steam engine and train in his basement in Victoria. Cutting a hole in the wall of his house to get it out and onto 7 1/2 inch gauge tracks all around the neighborhood, the railway soon became too big an attraction for his community and as events unfolded, it was announced by the Vancouver Parks Board in April of 1947 that a location in Stanley Park was to become the new home for Armstrong’s railway. The Board then discovered that it was required to comply with all Federal regulations pertaining to the operation of a railway. A “company management team” was required by law, thus park commissioners and staff were appointed to fill this legality, all in the spirit of getting the railway started. The track was laid on the site of today’s miniature railway parking lot. The rails were placed in a wider 9 1/2 inch gauge to improve stability and this required that the engine and rolling stock of small red wooden boxcars were modified to fit. Adults did not routinely ride the train as the cars, typically carrying two or three children each, were too small.

It is said that the miniature railway was a favorite project of George Wainborn, the city's longest-serving parks board commissioner, who passed away in 2003, and that, in 1958, he raised money to be directed towards a larger gauge miniature railway. Wainborn’s passion for this project was boosted by an unanticipated disaster; on October 12, 1962, the still-powerful remnants of Typhoon Freda hit Stanley Park causing considerable damage and the loss of approximately 3,000 trees creating a 6-acre clearing behind the children's zoo. The Parks Board, found opportunity in this development and under the oversight of Deputy Superintendent Bill Livingstone, the broken, and uprooted trees, were cleared and the terrain transformed into a substantial 20 inch gauge horseshoe-shaped railway circuit. Neilson Machine Works in Richmond built a marvelous miniature replica of Canadian Pacific Engine #374, the engine that pulled the first transcontinental train into Vancouver in 1887. Stanley Park’s new miniature railway commenced operations in March of 1964. 26,055 passengers were carried in the first 7 days of operation. Tickets were 25 cents for adults and 10 cents for children. In December of 1964, Commissioner Grace McCarthy arranged, with BC Hydro, for festive lighting of the train route for a 16 day period; the Stanley Park Christmas Bright Nights tradition continues today.

Today, the railway is run by a cadre of dedicated and skilled Parks Board employees who maintain and operate the trains. The rolling equipment now includes three replica engines and three sets of large passenger cars. The rather uncommon 20 inch gauge track, wide by miniature standards, offers commodious passenger cars that can accommodate entire families of children, parents and grandparents, an important accommodation as there should never be any age limit on miniature railroads. Today, the system carries over 20,000 passengers per year. In recent years additional engines and cars have boosted capacity in an effort to meet the seemingly insatiable public demand particularly during the Christmas, Easter and Halloween events.

I painted Stanley Park Junction from photographs that I took in the winter of 2010. Photographing in the daylight allowed me to capture all the tiny details; the snow and night lighting were added by me later in my studio. To properly finish the painting, a return visit to take more detailed photographs was required.

Few Vancouverites have not made the pilgrimage to Stanley Park Junction, the tiny station that serves as the official portal to the railway system and it is for all of the children, parents and grandparents which formed the core passenger group and over the past 64 years of operation that I offer this painting of the little railway and the millions of happy smiles it has created.