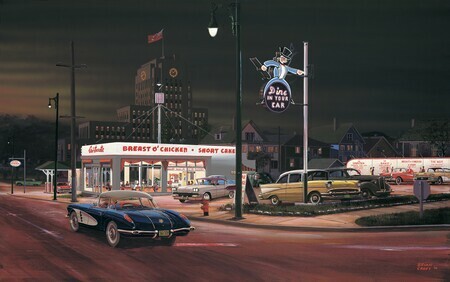 For those of us who spent our teen years in the Fifties and Sixties, it was an unforgettable time. The automobile had only recently evolved into an affordable and even essential component of family life. Teenagers were lining up for the first time to take driving lessons and saving up for their first car. When it all came together and we turned the ignition key on our first solo driving experience, the whole world lay at our feet. We were free to roam, free to explore our new world. The more stuff you could do in a car, the better; that included eating!

In Vancouver, drive-in restaurants arrived spontaneously. One chain, the Aristocratic, was the brainchild of Frank Hunter, a druggist who switched to the bakery business, eventually seizing on the opportunity to run restaurants rather than supply them. His first drive-in opened in 1932 at Kingsway and Fraser; the second opened at Alma and 10th. Drive-in no. 3, the subject of this painting, opened in 1937 on the north-east corner of Cambie Street and West 13th Avenue Motto Klean, Kosy, Kwick, Lights-for-service. The entire endeavor was hugely successful and the Aristocratic Drive-ins were enthusiastically accepted as cool places to go. Frank went on to open regular restaurants, the most memorable, was located on Theatre Row at Granville and Smythe. The regular long line ups by theatre patrons were a testimonial to Aristocratic’s excellent food and service.

In 1947 Frank sold to a group of business men. By the early 50s Aristocratic employed 95 staff and added its own butcher shop at the Cambie Street location and in1953 Hank Oliver was hired as a very successful general manager; in 1956 the chain is sold again, this time, to a group of hockey players. Eventually Hank is let go and the operation begins to slide. By the late 50’s the chain is in such difficulty that Hank is called back. He reorganizes, attracts many former employees to return and continues with the five most profitable locations although not without ups and downs. The chain went bankrupt in 1959 and in 1975 the Cambie location is sold to White Spot chain.

When I was a teenager, I had no idea that we were making history; but we were! We adored Rock and roll, cars, dances, drive-ins and girls; yes we had to squeeze school in but that wasn’t the main priority. On our car radios Red Robinson led the revolution spinning record after record of the grooviest new music. Red was more than popular, he was right on top of the new wave of music and he made absolutely sure we were too. By 1957 he was earning $1000 a month and even though he didn’t have a drivers license, he bought his first car, a brand-spanking-new (Red) 1957 Ford Fairlane 500 convertible and when he did get his license, the Aristocratic was definitely on his agenda.

My painting Aristocratic Drive-in – 1958 pretty well sums it all up; it was the best of times. I Painted Red Robinson in his immaculate Fairlane parked against the Menu boards, a young lady, brunette with a Jackie Kennedy hairstyle, sits beside him, his wife Carole. In the background Vancouver’s City Hall glows warmly in the last minutes of a setting sun. The superlative animated Risty in neon floats aloft repeatedly pointing his arm in the direction of the parking lot and the brilliantly lit Aristocratic. Inside, patrons feed the jukeboxes lining the counters while they ponder the menu boards repeated over the kitchen. Of course I painted in a few of the iconic chariots of our youth. On the distant corner a 1958 Ford Thunderbird passes by while a 1958 Chevrolet Impala pauses at the Imperial pumps. A sky blue 1954 Pontiac Chieftain is parked against the restaurant and beside it a 1937 Chrysler P6 while a 1958 Pontiac Chieftain Coup is leaving the lot. Against the menu boards I painted a 1956 Buick Special beside Red Robinson in his 1957 Ford Fairlane 500 convertible. On the corner a “classic” 1957 Chevy Bel Air Sports Coupe eclipses a car of senior vintage. Finally I couldn’t resist placing a 1958 Corvette cruising north on Cambie; the ultimate freedom machine

In 1983 Oliver sold off the last Aristocratic and by a stroke of good fortune the last remaining “Risty” neon sign was salvaged and is now at The Vancouver Museum. -Brian Croft