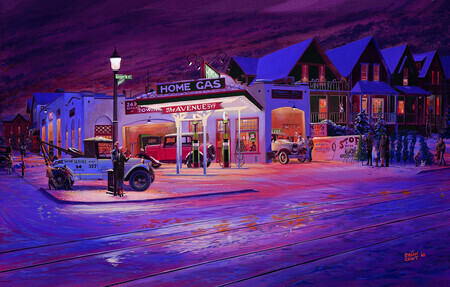 My painting, “Christmas at Home”, emerged from a charming archived photograph of a Home Gas station that was once located on the corner of East Georgia and Dunlevy in Vancouver’s Strathcona district. Founded in 1928 by prominent local businessman Austin Taylor, the Home Oil Company opened a number of automotive gas stations in various parts of Vancouver; they soon became familiar, popular and essential to the growing number of families acquiring automobiles. Although the “Home Gas” brand remained in use until 1976, the company had, in 1937, become a wholly owned subsidiary of Imperial Oil.

I began the painting with the archived photograph as my basic reference and very quickly decided to create it as a snowy evening scene with Christmas approaching. I added several houses to the right side of the gas station to accentuate the feeling of adjacent neighborhood homes. This permitted me to play with light values as I made the streetscape recede from the well-lit station and into the chilly night. I added a number of focal points: several automobiles, a dog, a Christmas tree vendor that simply had to be there, children, young romantic teenagers, parents and neighbors. After careful research, to establish that such lights were in common use in 1929, I even painted Christmas tree adorned with electric lights in a window.

The Home Gasoline advertisements are all authentic and while I did establish that the corporate colours were green and red with white lettering, the colour relationships I chose were educated guesses. I added the Valvoline sign and the “Tires on Credit” sign, both borrowed from similar signs I found at the Howe and Davie Home Gas station. Although I could not find a single close-up colour photograph of the Home Gas pumps, I had plenty of related reference books to help me create the “Visibles” pumps as they must have looked; these were pumps with glass cylinders on top so that the gasoline could be visually measured before and after refueling.

It had been my original plan to include the British Columbia Electric Railway’s (B.C.E.R.) streetcar #306 trundling down the center of East Georgia. This line ran from Victoria and Frances streets to Kitsilano. As the painting progressed I discovered that this route had been deemed underused, compared to the line along Hastings to the north and as a result service was eliminated on February 13, 1925. Interestingly, the transportation gap was quickly filled; a neon “Taxi” sign now shines in the window at Home Gas.

Just a month or so before this scene, on October 29, 1929, the American Stock Market crashed and in the following two weeks thirty billion dollars evaporated. Few, in working-class Strathcona, will escape the consequences of the ensuing depression. But for now Christmas is approaching and in that spirit I have painted the corner of Georgia and Dunlevy with snow on the ground, children playing, decorations being hung and a neighborhood nestled reassuringly up to the warm lights of the very modern Home Gas station on the corner.