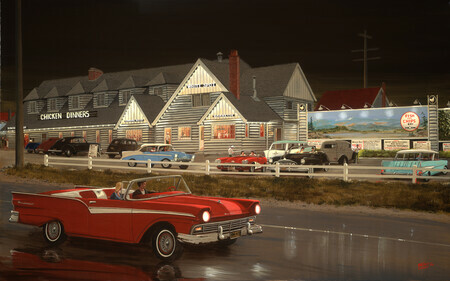 For those of us who spent our teen years in the Fifties and Sixties, it was an unforgettable time. The automobile had only recently evolved into an affordable and even essential component of family life. Teenagers were lining up for the first time to take driving lessons and saving up for their first car. When it all came together and we turned the ignition key on our first solo driving experience, the whole world lay at our feet. We were free to roam, free to explore our new world and in that world, we lucky few, who grew up in Vancouver, quickly found an amazing place called White Spot.

Nat Bailey built White Spot from scratch just like the delicious food he was known to deliver. The original White Spot dubbed No.1 opened in 1928 on Granville and 67th Ave. It was the culmination of years of entrepreneurial effort and success. “No. 1” was originally a tiny log cabin drive-in flanked by billboards. On the roof, the words, “White Spot Barbecue” were painted inside a big white spot. The drive-in formula worked, Nat’s food worked and White Spot took its place in the hearts of Vancouverites. In 1938 Nat built on his success; having bought up some adjacent land, he renovated No.1 and opened a much larger drive-in with a restaurant attached.

It was a very classy place. The large attractive Cape Cod style restaurant retained the log construction of the original barbeque, but that was about it. The interior of the restaurant was expertly finished in knotty pine and patrons were seated at custom-made maple tables and chairs. The menu was impressive and of course Nat saw to it that the food was better than ever.

White Spot became The-place-to-go if you had serious dining plans. It was a “must do” kind of thing for performers and celebrities after The Cave, The Palomar and other showrooms closed. Jack Benny, Bing Crosby, Wayne and Schuster, Dennis Day, Mary Livingstone, Henry Mancini, Robert Goulet, Van Johnson, Dal Richards, Mel Torme and a host of others gravitated to the south end of Granville for a taste of White Spot restaurant excellence.

Outside, the drive-in experience at White Spot was made all the more entertaining by eight 30-foot wide murals that adorned the parking lot featuring marvelous next-best-thing-to-being-there scenes of beautiful British Columbia painted by local artists David Tait, Jim Osborne and Peter Hopkinson. Beneath the murals were scores of advertisements, signs and menu boards. After you parked and had decided what to eat you were directed (by signs) to turn on your headlights and this would signal the appearance of a car-hop dressed in immaculate whites, patent-leather bow-tie and white-peaked hat. Fish and Chips was 50 cents, a hamburger a nickel less, all delivered promptly on a custom-made fiberglass tray that stretched across your car from window to window; a ten or fifteen cent tip was considered generous.

I am just one of countless post-teen Vancouverites who fell in love with Nat Bailey’s White Spot, his car hops, and especially his “Triple O sauce”. Although No.1 burned down in 1989, it is no surprise that the White Spot formulae of dining excellence has survived. To recreate and bring back just a little bit of that original Nat Bailey magic at Granville and 67th Ave. I blended memories and fun with pigment on canvas and created “White Spot No.1 – 1958”.