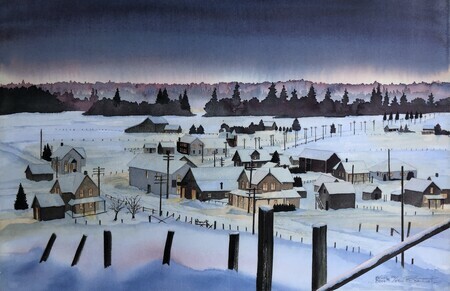 In the early days Murray’s Corners on Langley Prairie was an important centre for local families who relied on the many businesses that sprang up there over the years. “The Corners”, being roughly halfway up the Fraser Valley and one-days-journey from Vancouver, was also important for travelers as a natural overnight stop; Billy Murray’s Traveler’s Hotel, at the far left of the painting, fit that bill nicely. For many years the little hamlet thrived on pioneering growth.