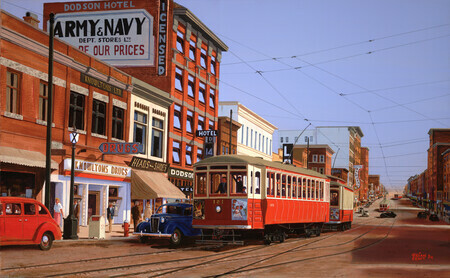 “Car #101 on Hastings – 1949” is one of the original paintings in my “Streetcars of Vancouver” collection. The collection is intended to bring to life the colourful and exciting story of the British Columbia Electric Railway Company (BCER) and its electrified streetcar and tram service.

My painting “Car 101 on Hastings – 1949” looks eastward down Hastings from Carrall. This was the all-important intersection where BCER built it’s main depot building. It shows the thriving and vibrant streetscape of the time. Most of the buildings in this painting are still standing today. Several businesses’ such as, Knowlton Drugs, the Dodson Hotel and the Balmoral are still in operation. Behind the viewer stands the BCER Main Depot, also still standing today, which I intend to paint at some time in the future.