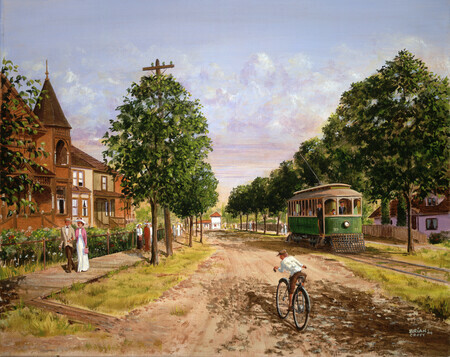 “Park Row, New Westminster – 1909” is one of the original paintings in my “Streetcars of Vancouver” collection. The collection is intended to bring to life the colourful and exciting story of the British Columbia Electric Railway Company (BCER) and its electrified streetcar and tram service.

My painting “Park Row, New Westminster – 1909” is a warm and sunny glimpse into the golden days of streetcar service. Streetcar #39 rumbles and clangs along Park Row in New Westminster on a sunny afternoon. This street is still a fine neighborhood today and it is easy to imagine the busy stream of pedestrians walking on wooden sidewalks to and from Queens Park.

This painting was one of the smallest in this collection. There is nothing grand or elaborate in the scene. As I painted I was drawn by a pleasant sense of community and neighborhood that emerged on the canvas. In the end Park Row glowed with a simple elegance, a painting of a wonderful time in our past.