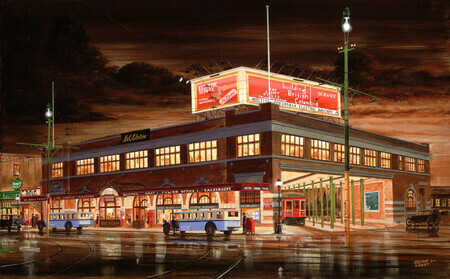 “New Westminster BCER Depot – 1926” is one of the original paintings in my “Streetcars of Vancouver” collection. The collection is intended to bring to life the colourful and exciting story of the British Columbia Electric Railway Company (BCER) and its electrified streetcar and tram service.

The original reference photograph, captioned 1926, that I used to establish this painting appears inside the front of Mr. Henry Ewert’s book “The Story of the B.C. Electric Railway Co. It shows the impressive depot that BCER built in New Westminster; the building still stands today.

The original New Westminster depot opened on March 26 1900. It was a modest one story building on the south side of Columbia between 8th and Begbie St. A second much larger depot was built opening in 1911. Photographs of the new depot in 1912 show that there was no canopy installed at that time but by 1926 an impressive canopy protected pedestrians on their approach and departure from the depot.

I decided to paint the depot as a night scene so that I could emphasize the corporations two main functions were to provide both rapid public transportation and an electrical power grid. When BCER pushed out new railway beds they brought with them electrical service. In a very real sense BCER lit up the Lower Mainland and I felt I could dramatize this by painting the New Westminster depot, proud with electric lighting, in front of a threatening night sky.