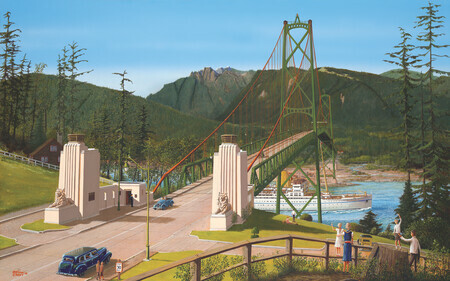 Majestically spanning the entry to Vancouver harbour, Lions Gate Bridge was built during the last years of the great depression. While it provided a road link connecting Vancouver and the communities of North and West Vancouver it was, in reality, an essential component of the Guiness family’s ambitious land development plans, located on the south facing slopes of West Vancouver, later known as, The British Properties.

When it opened in November of 1938 the elegant, graceful and brilliantly engineered 1516 meter sweep of Lions Gate Bridge was heralded as longest suspension bridge in the Empire. It quickly captured the imagination of a depression-weary population becoming an icon of Vancouver’s bright future as Canada’s Pacific Gateway.

Guarding the south-side road approach, two art deco lion sculptures, cast in concrete and designed by Charles Marega were intended as symbols of Empire. The original two lanes were wide and allowed room for passing however the speed limit was a stately 25 miles per hour. The narrow pedestrian sidewalks cost 5 cents to walk on. The navigation station, previously situated at Prospect Point was mounted at the centre of the bridge just above the main cables where it had a commanding view of the harbour and its approaches. The bridge structure was painted green but the suspension cables were coated in a bright orange-red colour called international orange.

My painting captures Lions Gate Bridge on the early evening of Tuesday, July 25, 1939. In the distance Grouse Mountain rises immediately behind the bridge. To the left of Grouse is Crown Mountain. Further left but out of view behind the slopes of West Vancouver lay The Lions after which the bridge is named.

That evening CPR’s Empress of Japan arrived in Vancouver and after passing below Lions Gate Bridge, clearing it by 30 feet, docked at CPR Pier B at 6:00pm. Many passengers on board were fleeing the Japan-China Conflict and amongst them was Jean Ewen a nurse who had served with Dr. Bethune. Her story, reported the next day in the Vancouver Sun, was one of service, sacrifice and near incarceration during her escape. On the following Friday the Empress of Japan sailed west under the Lions Gate but her grand days of Pacific passenger service would soon end; Canada declared war on Germany on September 10,1939 and by November the Empress of Japan was requisitioned for Admiralty duty as a troop ship.

The bridge has had many changes: In 1954 the two lanes were subdivided into three and the speed limit was raised. In 1963 the province purchased the bridge and later the tolls were removed. The navigation station closed in 1974. In 1986, the year Vancouver hosted EXPO 86, the bridge was beautifully decorated with 170 mercury vapour lights in a project spearheaded by Social Credit MLA and Cabinet Minister, Grace McCarthy with funding provided by the Guiness family, the original developers and owners of the bridge. In 2004, the Lions Gate was named as a National Historic Site in Canada, in 2009 LED lights replaced mercury vapour and by 2001 the bridge deck was completely replaced. Despite the passage of time, Lions Gate Bridge remains as breathtaking and beautiful as the day it was built.