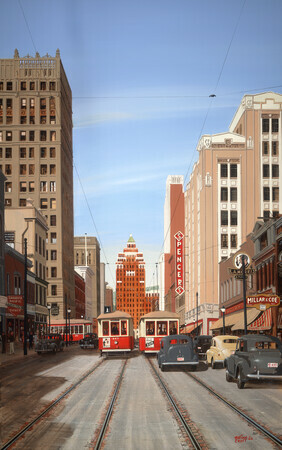 “Marine Building on Hastings - 1945” belongs to my “Vancouver and BC Electric” collections which brings to life the colourful and exciting story of the British Columbia Electric Railway Company (BCER) and its electrified streetcar and tram service.

One of the first main lines serving downtown was the Fairview line creating a double-tracked loop from Hastings onto Granville then Broadway and finally Main Streets. Hastings and Granville could certainly be thought of as the center of the quickly growing city. In the early years Hastings Street, west of Granville was an upper-class residential neighbourhood. But by 1909 the Winch building was built followed shortly by the Post Office in 1914. These imposing buildings foreshadowed the eventual evolution of Hastings Street into a commercial area.

The Marine Building was built in 1929 – 1930 at a cost of $2.3 million. At 349 feet, it was a magnificent 25 stories high. Designed in the Art Deco style by McCarter and Nairnes and built by G.A. Stimson Co. it was the first really modern skyscraper in Vancouver. The Stimson Co. suffered bankruptcy shortly after the building opened and eventually AJ Taylor purchased it. Taylor was president of British Pacific Properties, built Lions Gate Bridge and was instrumental in the development of West Vancouver. Taylor occupied the penthouse requiring him and his wife to climb the stairs above the 18th floor where elevator service terminated.

The Weart building on the left, built in 1912, and the modernistic Spencer’s department store building on the right, built in 1928, also dominate this scene of Hastings Street. Eatons eventually bought the Spencer building in 1948 and the highly successful Spencer family moved their business offices to the penthouse in the Marine building. In the early seventies the old Spencer’s building was redeveloped, complete with revolving restaurant, into The Sears Harbour Center. Today it remains a striking landmark on Vancouver’s skyline serving as The Simon Fraser University Harbour Center Campus.

My painting “Marine Building on Hastings - 1945” is intended to showcase BCER streetcars and Vancouver’s Marine Building in its anchoring location at the west end of a busy Hastings Street in 1945. Time has been very kind to the Marine Building; it was renovated in 1990’s at a cost of $20 million and many of the original tenants are still in place including the architectural firm that designed it. Quite possibly one of the finest examples of Art-Deco design in Canada it continues to stand as a proud sentinel to Vancouver’s Maritime presence and the city’s role as Canada’s Pacific Gateway to the World.