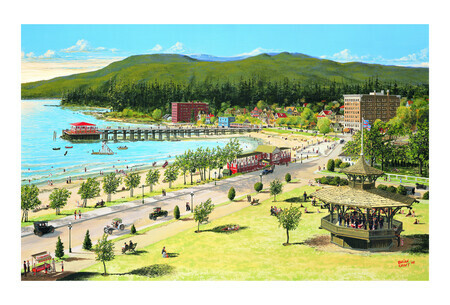 English Bay or First Beach, as it was once known, is one of the most beautiful waterfronts imaginable. Clear evidence of the importance that Vancouverites placed on the beach was the1898 introduction of the BCER Davie St. Streetcar service, connecting Vancouver’s downtown with the beachfront on English Bay.

As strange as it may seem today, as late as 1911, much of the beachfront was still privately owned. Maps dating back to 1887 clearly show subdivided lots extending onto the beach and these, of course, became prime sites for private bathing houses, cottages and boathouses. Fortuitously, in 1905, the beach came under Parks Board’s control. Initial work included the clearing of rocks and expanding beach accessibility. Over the ensuing years, the privately held lots on Beach Avenue were gradually acquired and returned to public use and the result is the magnificent crescent-shaped beach front that we enjoy today.

My painting, English Bay –1916 is an attempt to capture the beachfront in these maturing years. This was a time of growing realization and already the beach was a source of much public pride. Let me walk you through the painting. In the upper right, I went to extraordinary lengths to include a couple of early streetcars negotiating the corner at Denman and Davie. I made them visible by reducing a screen of otherwise obscuring trees. At the center of the painting, I again reduced tree foliage to expose the wonderful red and white (my colours) framed bathing pavilion. This attractive 3 level affair was built in 1906 for $6000. Entry was at street level, changing rooms at beach level and an open-air observation veranda topped the structure. Just to the left of the pavilion is a huge white boulder that, in earlier years, separated the beach; gentlemen bathed east of the rock and ladies to the west. To the north was a white-concrete bathhouse, built in 1909, which replaced the original private boathouses. Notably, it was converted to an Aquarium in 1939 and eventually torn down in 1955.

I thoroughly enjoyed painting the magnificent pier. Built in1907 at a cost of $21000, it stretched some 100 yards into the bay. A year later, BCER stepped in and paid the cost of installing ornamental lighting down the center of the pier boardwalk and shortly after, the Parks Board authorized the construction of a Tea Room which was subsequently leased by C.N. Lee. This popular and charismatic cornerstone of the English Bay waterfront was, sadly, rather poorly maintained and it was subsequently torn down in 1939.

The brownstone Sylvia Court, built in 1912, was originally an apartment block. The top floor, dubbed, “Dine in the Sky” restaurant was the place to go in the 40s and 50s and in 1954 The Sylvia opened the first cocktail bar in Vancouver. Gradually, by the sixties, The Sylvia transitioned to a full service hotel. It was a striking landmark and remained the tallest building in the West End until 1958. The other large and more distant red-brick building is the Englesea Lodge which, for many years, stood sentinel at the entry to Stanley Park. Just this side of the Englesea are the very last of the colourful on-the-beachfront cottages.

In 1914 the English Bay promenade was enhanced by the construction of the Alexander Park Bandstand. It was named after the consort to Edward VII and was an exact copy of the Stanley Park bandstand. In a whimsical gesture, I painted the Parks Board Band playing a late afternoon concert hoping to add a romantic and musical dimension to this perfect place.....English Bay in 1916.

Another Brian Croft painting linked to this work is Bathhouse on English Bay – 1931.