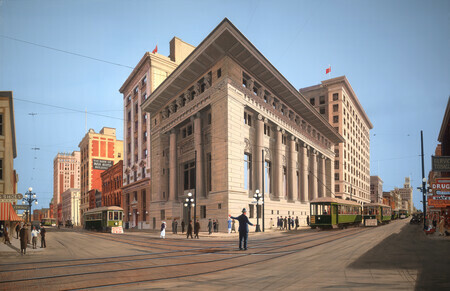 “Granville and Hastings - 1921” belongs to my “Streetcars of Vancouver” collection which brings to life the colourful and exciting story of the British Columbia Electric Railway Company (BCER) and its electrified streetcar and tram service.

My painting looks down the Fairview line to the southwest on Granville and southeast on Hastings. In both directions Vancouver’s bold new skyline rises dramatically. Across the street a stunning Canadian Bank of Commerce building built in 1906 anchors the intersection. Next door the Rogers building, built in 1911, makes for an impressive neighbor. Further down Granville the Vancouver Block, built in 1912 with the world’s largest clock, shines in the late afternoon September sun. Down Hastings, the Province building is visible in the distance and the World Tower (tallest building in the Empire when built in 1912) peeks tentatively around the edge of the Weart building. Intertwined with all of these impressive landmarks an eclectic collection of retail and professional ventures provide Vancouver’s residents with a world-class downtown.

A seemingly endless stream of BCER Streetcars glide in opposite directions through this great intersection. Although traffic is still driving on the left side of the road the planned switchover to the right side in 1922 has already caused BCER to modify its streetcars with new doors on the opposite side of each car. Interrupted only by passenger stops and a lone-policeman’s baton these amazing streetcars tirelessly transport folks to and from this, the shopping center of Vancouver. BCER streetcars, serving as moving billboards carry advertising banners proclaiming performances by the Sells-Floto Circus on the upcoming weekend of September 9th and 10th.

My painting “Granville and Hastings -1921” captures some of grandness of our past. These were the heady and promising days following the Great War. The single policeman who governs Vancouver’s main intersection with ease and authority implies a distinct orderliness. Vancouver was growing fast, things were happening in a grand manner and there was much purpose in the air. These are certainly years to be remembered, Vancouver’s Glory Years.