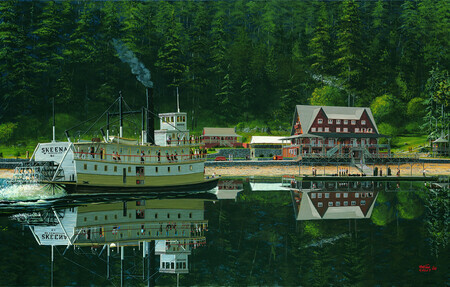 Completed in 1910 by partners Alvo von Alvensleben and Benjamin Dickens, the Wigwam Inn was located on the west side of Indian Arm near its northern tip. Alvensleben is believed to have secured financing for the venture from several prominent Germans including Kaiser Wilhelm who was rumoured to have plans to use the Inn as a retreat. The original design theme was to be native Indian but was soon modified to a German Luftkurort (a fresh air resort). It was described in publications of the time as having a beer garden theme, with stonewall terracing, lookouts and an elevated summer garden, or gazebo.

The Inn itself features a steeply gabled roof over scaled gable dormers and porch braces. The Inn’s exterior walls were clad with cedar tiles, and for the painting, I chose a reddish-brown stain. I finished the window trim and window casings in a creamy-white and the main doors in a dark green. The Inn had 32 bedrooms, with steam heating and hot and cold running water throughout. The dining room could accommodate 100 patrons with a summertime overflow of another 100 onto the veranda. In the 1930’s the southeast corner of the veranda was enclosed. Two summer cottages were built adjacent to the Inn; one is shown to left, just behind the hotel, built by partner, Dickens. The white canvas-roofed structure immediately behind the Inn resembles and probably was a German beer tent.

A floating pier extended directly out from the front door steps of the Inn into the tidal Indian Arm. At its head another floating docking pier ran parallel to the shore, equipped with an overhead trellis to provided support for night lighting.

The scheduled opening day was to be Empire Day, May 24, 1910 but due to delays it opened three weeks later. The steamer “Baramba” brought over 600 people to Wigwam Inn for the occasion. Impressively, among the first to sign the guest register were John D. Rockefeller and John Jacob Astor.

The Inn was served by various steam launches over the years. Amongst the earliest vessels, the sternwheelers “Alluvia” and “Skeena” made regular moonlight excursions “up the Arm”, often with a band on board and dancing on deck. By 1915 the big launch “Fruilda” ran the 20-mile outing every day from the Gore Avenue dock in Vancouver, leaving at 10 am. The price for the one-day excursion was $1. A weekend special was offered for $5, which included all meals while at the Inn. In later years, smaller vessels such as “Belcarra”, “Scenic”, “Harbour Princess”, “Lake Buntzen” and “LoOlbee” were also regular visitors.

Because historians and authors often refer to the early 1900’s as Vancouver’s golden years, I painted in support of that sentiment by depicting an idyllic and romantic Wigwam Inn. I used the waters of Indian Arm as a natural mirror, polished to perfection by an absolute stillness and calm. The double-reversed painting of the detailed reflections of the Inn and “Skeena”, arriving at midday, required an unnerving amount of extra work but in the end, it was worth every brush stroke. I hope you find in my painting, “Wigwam Inn, Indian Arm – 1913”, a warm and romantic glimpse of Vancouver’s grand days past.