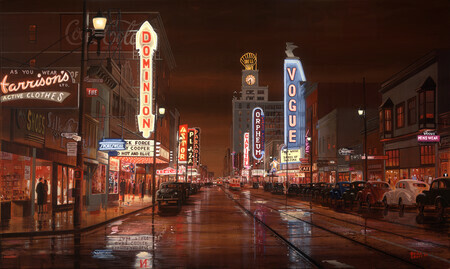 My painting,“Theatre Row, Granville Street – 1950”, is a sequel to my previous sold-out “Theatre Row – 1948” painting and giclee print. This new scene looks north on Granville from Nelson Street on a January evening in 1950. Archived back issues of the Vancouver Sun’s entertainment section, provided the information on the entertainment scene, thus the movie titles that appear on the marquees are as accurate as possible. I used more than a hundred researched images to add detail upon tiny detail.

At the Dominion, Gary Cooper stars in “Task Force”, while last year’s hit “Red Hot and Blue” completes the double bill. Across the street, the Vogue is selling John Wayne in “Sands of Iwo Jima”. The Orpheum boasts “Jolson Sings Again” starring Larry Parks. The fresh comedy of Danny Kaye in “Inspector General” is playing at the Capitol. Also playing on the strip tonight: “Abandoned” at the Plaza, the last showing of “Zamba, Terror of the Jungle” is at the Paradise, and at the Studio, “Lost Boundaries” is in its 5th record week.

I painted the Vancouver Block tower clock, absent today’s garish red and blue neon, and place the clocks hands at 7:30; this is actually between shows at most theatres and so, rather than depicting line-ups, I painted patrons checking out marquees and grabbing a quick supper at the countless cafes. I included two streetcars working in opposing directions down Granville Street bringing people to the heart of Vancouver’s entertainment district. By 1950 electric trolley busses had already begun operating and so at the far end of the street, pulled over to accept passengers, a tiny brand-new “Brill” trolley bus is included.

This painting is just part of Vancouver’s night scene. Around the corner on Hastings, the entertainment district to the east and west of Carrall are just as busy. The main nightspots are in full swing this evening; Mel Torme, dubbed “the Velvet Fog”, is performing at the Palomar Supper Club and Billy Eckstine is at the Cave. On Granville, The Aristocrat with its distinctive neon sign dominates the cafes and eateries but a few miles further south, at Granville and 67th Avenue, White Spot was the place-to-go if you had serious dining plans. It was a “must-do” kind of thing for performers and celebrities after The Cave, The Palomar and other showrooms closed. Jack Benny, Bing Crosby, Wayne and Schuster, Dennis Day, Mary Livingstone, Henry Mancini, Robert Goulet, Van Johnson, Dal Richards, Mel Torme and a host of others gravitated to the south end of Granville for a taste of White Spot restaurant excellence. My painting, “White Spot – 1958” chronicles the White Spot experience.

A painting like this can be a daunting undertaking. So many big and little decisions such as researching or choosing colours, filling in gaps where no amount of investigation could tell me what to paint. As always, my brush strokes were guided by history and only later, after all sources were exhausted, did I employ artistic license to achieve a finished work. Thus it was my imagination that created places like Flag Shoes, Silk and Lace and Sharon’s etc. It was such a delight to light-up Granville Street’s theatre marquees once again casting them against a brooding night sky. Even more fun to create mirrored reflections in the pavement suggesting the recent passage of a January evening shower. I can only hope it takes you back to that special time in your past when, with five bucks in your pocket, and a special person by your side, Theatre Row on Granville was a night on the town.