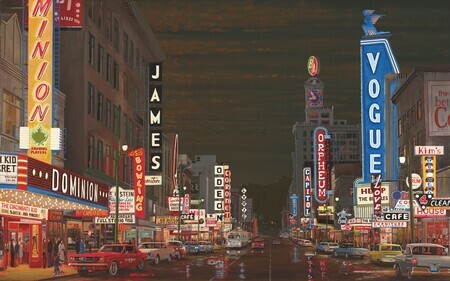 When I researched and painted this 1965 scene, I realized that I was revisiting memories and emotions. For me, 1965 was full of adventure which included occasional trips down-town for shopping or to see a movie. It was easy to catch the Richmond Express at the Sexsmith Bus Loop and be whisked to the neon-lit strip on Granville street where all the movie theatres beckoned. I attended Steveston High School in Richmond and commenced grade 12 that September and all of us at school were swept up in the latest fads, clothes and music. We carried the music with us on transistor radios; the clothes and fads arrived on television. The theme that year was to be “Cool”.

The perspective and vanishing point for this painting were adopted from a daytime photograph, taken with a powerful zoom compression. The scene was extrapolated on the left to include more of the Dominion Theatre. Researched details, were added which propelled the scene far beyond what any single photograph could show.

It was important to me that I find the perfect selection of 1965 movies to display in the theatre marquees. Because I have such a powerful memory of it, I wanted to include The Sound of Music, released in 1965 because, but my research revealed it did not show on Granville. By researching the entertainment page in Vancouver newspapers for the entire year, 1965, I eventually found what I wanted. A few days before Christmas the following movies were playing on Granville street west side: Cincinnati Kid, Laughing 20’s with Laurel and Hardy, The Collector, Die Monster Die and Planet of the Vampires. On the east side: Help, The Reward, Battle of the Bulge. I did not want Christmas to dominate the painting so restricted myself to a tree with lights and a few signs.

C-FUN's hot "Top 40" music format, framed by the incredible 300-hit Soundathon promotion, made it the top rock and roll station in Vancouver until 1967. In the Fall of 1965 the DJ line up was: Tom Peacock at 6:00am, Al Jordan at 9:00am, Red Robinson at noon, Fred Latremouille at 3:00pm, Ed Karl at 6:00pm, Mad Mel at 9:00pm and John Tanner at midnight. C-FUN had four "Poppy Red" Ford Mustangs, two coupes and two convertibles, with C-FUN “Fun Bug” logos, created by Red, on the side doors. How could I not place a C-FUN Mustang in front of the Dominion Theatre?

While researching Vancouver’s 1965 Street Index at the Vancouver archives, I was reminded of how fluid the streetscape was. Not only did the theatres change hands, but the marquee names changed over the years. Local businesses came and went or often moved location as fortune dictated. So painting the street as it was in 1965 is a daunting task which requires a mixture of researched facts and artistic licence. The iconic Aristocratic neon sign with “Risty”, his arm animated by sequencing neon, is pleasantly familiar to me. The White Lunch sign just north of the Capital Theatre is almost out of view save for the bottom of the tea cup which I managed to paint in only because I knew it was there. And Scott’s Cafe further down Granville was a fine place to eat when downtown.

Painting cars onto the street is always the hardest thing to do and I attempted to add some of the more interesting vehicles of the era. However I veered from that goal to include a white 1958 Ford Anglia simply because that was the first car I owned. The streetscape would not be complete without some BCHydro Brill, electric trolleys, however these need careful attention and with the help of the Transit Museum society, I managed to get these into the scene with some degree of authenticity.

Towards the end of this project I painted tiny date-stamped details like TVs and furniture in store windows and perhaps the tiniest of all, the hot-new develop-in-seconds '65 Swinger polaroid camera which I painted into the window of BC Camera Service. I had a Swinger in 1965 and still have many of the black and white photos that I took with it. And, finally, it was well known photographer Foncie Pulce’s photos from 1965 that helped me add the people on the sidewalk. Of course, these people, on the sidewalk, are you and I back in 1965 and I hope you enjoy being transported back to that wonderful time when we were all so very young. Brian Croft