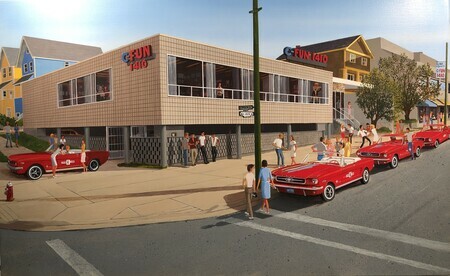 I was in grade 11 in 1965 and it was a very cool time to be a teen. Learning to drive was liberating and once you got your licence you also got control of the car radio, yours to operate as loud as you wished. Although I had a transistor radio, it didn’t compare to the car radio and the first pleasure was setting up those radio push buttons. For me there was only one worth setting; “14", or as we all knew it, C-FUN at 1410 on the dial. C-FUN 1410 with rock-solid programming, great deejays and lots of fun was where it was at. The deejays were local celebrities and teens knew their names and followed the station all day. In the Fall of 1965 the line up was: Tom Peacock at 6:00am, Al Jordan at 9:00am, Red Robinson at noon, Fred Latremouille at 3:00pm, Ed Karl at 6:00pm, Mad Mel at 9:00pm and John Tanner at midnight.

In the late fall of 2019, I got word that the old CFUN studio building was going to be demolished for a redevelopment. This news triggered a great deal of "oh my gosh" from old fans and radio employees and in particular, deejays like Red Robinson and John Tanner. It was Red who put it to me that a painting might be the best way to remember this great radio station; what could I say, I was mesmerized by C-FUN back then and still am.

I pushed the throttle into afterburner and decided to do the painting, but there was a lot to learn. The station's studio was located at 1900 West 4th Avenue. The three men behind the building construction were Frank "tiny" Elphicke from CKWX, Ralph Cunningham, and Al McQuire. According to Red Robinson the design was a scaled down version of the larger CKWX studios. The building opened in 1959. Broadcasting and production studios were all clustered in the centre of the building. A hallway circumnavigated the studios and the various offices were daisy-chained around the outside walls. Station manager, Doug Greig's office was just inside the door on the right. Program Director, Red Robinson's office was next. The record library was against the south wall between two rear exits and Engineering offices had the south-east corner of the building. Traffic was on the east side and Sales and promotion offices had the front windows facing north.

I chose 1965 because that year C-FUN had four "Poppy Red" Ford Mustangs, two coupes and two convertibles, with C-FUN logos, and when they were all parked out in front of the station it created quite a stir. I painted three of the Mustangs out front and Red Robinson, in the fourth, exiting the under-building garage where he has stopped to sign autographs. At the time, Fred Latremouille was dating a young lady, Blanche, who lived in the blue house immediately south of the station so I painted them walking down the sidewalk towards Red. Red created the station's promotional mascot, "The C-FUN Funbug", so I painted that onto the sides of the Mustangs and on an inside wall visible through the front window. Then I added some deejays and teenagers talking, dancing and mainly having "FUN". Two 1965 transistor radios, a Zenith and a GE, are painted into the scene as well as the hot new develop-in-seconds '65 Swinger polaroid camera.

Let me give you a tour inside. At the main entry, at the top of a curved staircase, sat receptionist and switchboard operator, Bea Tranowski; I painted Bea standing outside on the entry veranda at the top of the stairs. Doug Greig can be seen looking out from his front office. The "Traffic Girls", who handled the Traffic Logs, were Barbara Tisman (blonde) and Joanie Lee (brunette) who can be seen peering out of their office window. Promotion Director, Mike Hanson looks out onto the sidewalk alive with teens.

C-FUN's hot "Top 40" music format, framed by the incredible 300-hit Soundathon promotion, made it the top rock and roll station in Vancouver until 1967. That's when the station changed to an easy-listening format, then changed its call to CKVN, meandered into all news, then talk shows and even big band before finally snapping back to rock and roll in 1970 and reacquiring its C-FUN call in 1973. Thankfully I missed that part as I was away flying fighters in the RCAF. When I got home again, I preset 1410 back on the dial but it wasn't quite the same for me. Neither has time been kind to the old C-FUN building on West Fourth, which today looks tired and lost. My painting "C-FUN - 1965" is meant to be a "rear-view-mirror" to bring back fond memories of a time when C-FUN 1410 ruled the air with rock and roll and FUN! Brian Croft