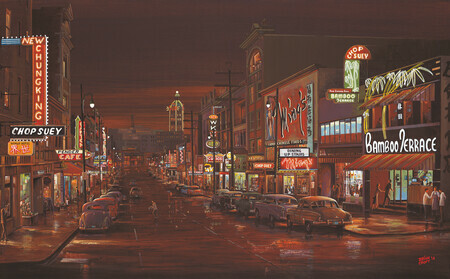 Vancouver’s Chinatown, centred on Main and Pender Streets, has its history rooted in the gold rush of 1858. The first Chinese immigrants came and stayed beyond those frenetic days working at many of the new jobs created by the emerging province of British Columbia. Then, in the 1880’s over 17,000 additional Chinese came to work on the building of the Canadian Pacific Railway but when that project finished many were without work and most found only low paying service jobs. Racial discrimination placed profound limits on job opportunities and many Chinese coalesced, for mutual support, into a community around 1st Street, at the time, called Shanghai Alley.

The economy went into recession at the turn of the century, and the discrimination and resentment against Chinese rose to new levels. In 1907, a white protest turned into a riot as crowds swept through Vancouver’s Chinatown breaking windows and causing the general destruction of many Chinese businesses. In 1923, the Canadian government introduced the Chinese Exclusion Act, in a move to restrict immigration from China. This Act was eventually repealed in 1947 and provincial legislation was then amended to permit Chinese citizens to vote in provincial and federal elections. During the late 1950s the Chinese community joined together with white supporters to oppose City plans to build a freeway through the heart of Chinatown. Eventually, as discriminatory tensions continued to abate, Chinatown took on a more progressive mantle with the development of many new business’, amongst which was a row of popular restaurants along East Pender.

In the late 60‘s this little stretch of Pender entered a slow decline as new Chinese immigrants showed little interest in living in the Chinatown-of-old, preferring to settle in communities throughout Vancouver and British Columbia. By 1971 Chinatown was declared a historical area and the brave struggle to preserve the cultural heritage and commercial viability of the area continues today.

My painting Chinatown - 1960 shows Pender Street at the apex of its popularity as a restaurant destination. I based the painting on a photograph found on the internet, credited to photographer Rolly Ford. Using over 100 additional photographs I pieced together this evening scene adding layers of tiny details as I went. The well known restaurants in the painting Mings, Bamboo Terrace, Ho Ho’s and many more all relied on elaborate neon arrays to attract their customers thus creating an exciting and exotic attraction and it is incredible to recall that, in the 60’s, Vancouver City Council enacted by laws restricting such neon displays. It gives me great pleasure to bring these signs alive again on canvas, to become, once again, signature pieces for this short stretch of Pender Street. All who frequented this tiny enclave in the 1960’s will have fond memories of evenings of fun and great food; I hope I have captured the essence of those magical times in Chinatown - 1960.