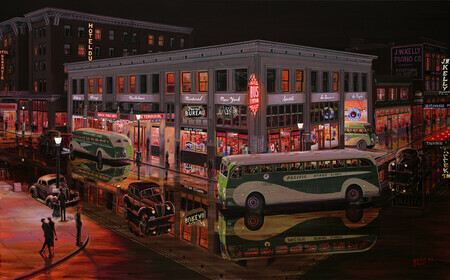 As with railroads and airlines, tracing transportation corporate history is always a jumble of buy-outs and mergers. I’ll pick up the story behind this painting in 1922 when Vancouver entrepreneur, Ivor Neil, decided to expand his small local bus company. He renamed it Pacific Stages Transportation Ltd, purchased a few more buses and commenced service between Vancouver and Port Moody and Coquitlam. Expanding as he went, Neil bought up other companies and eventually served the Fraser Valley and south as far as Seattle.

In 1924, The British Columbia Electric Railway Company (BCER) was watching Ivor Neil closely. The BCER understood the emerging potential of bus travel, sensed competition with its electric streetcar and interurban system and responded decisively. By 1925 The BCER formed BC Motor Transportation Ltd. comprised of Pacific Stage Lines (PSL) still run by Ivor Neil, and a tour bus line called Grey Line. In a parallel venture it also formed BC Rapid Transport to handle motor freighting in the Fraser Valley.

BCER’s BC Motor Transportation Lt. Expanded quickly and in 1926, ground was broken for a stylish new depot and head office on the southeast corner of Dunsmuir and Seymour streets. When the modestly sized depot opened that fall it was likely the most stylish and modern bus depot in North America.

By 1930 PSL ran service to West Vancouver and Horseshoe Bay, south through Surrey to Halls Prairie, Coast Meridian and Johnston, past Haney to Mission and Harrison Hot Springs and out to Sumas Prairie. In 1932 BC Motor Transport merged its BC Rapid Transit freight operation into PSL. New modern buses were acquired with streamlining and more passenger comforts. In 1936 a Vancouver manufacturer, Hayes, revolutionized the industry by creating a streamlined model based on the Chrysler Airflow. It was nicknamed the Teardrop, a bus so successful that Hayes became the main builder of PSL buses. Although only 5 were ever built, Hayes went on to build the magnificent and innovative “Clipper” model.

My painting Vancouver Bus Terminal – 1939 is based on an archived photograph by well known Vancouver photographer Leonard Frank. Although I added hundreds of tiny additional researched details, I made two major alterations by expanding the viewpoint laterally and creating a night scene. The decision to create a night painting meant that the 1939 bus schedules needed to be found and researched. This done, I am empowered to write that the Hayes Clipper in the foreground is the departing 7pm bus bound for Seattle Washington. The fare is $3 or $5.50 return. The teardrop In front of the terminal arrived earlier at 6:35pm. The teardrop emerging onto Seymour Street is the 7:15 departure to New Westminster via Kingsway. The PSL emblem on each bus features the flying horse Pegasus signifying strength, speed and beauty. The Depot was adorned with radiant neon destination signs and on the corner are pointers with more than 30 additional destinations. By design, passers-by would read these and begin to imagine themselves stepping on board a PSL coach, in every sense, a gateway express to the rest of the globe. The Hotel Dunsmuir anchors the left of my painting; the building survives to this day. The terminal housed several businesses located on the upper two floors. The sidewalk tenants included: Bridge River, a beauty salon, a barber shop, and a shoe shine stall. The main attractions, however, are close to the corner; Ivor Neil could often be found in Pacific Tour and Travel Bureau under the Travel bureau sign, United Cigars, a well known chain, occupies the double entry corner location and next door, Fountain Lunch, looks to be a most inviting eatery. All of this I painted as accurately as possible. The colours are of my own imagination and I painted the entire scene, in my own style, romantically reflected in the glistening evidence of a recent fall shower. All aboard!