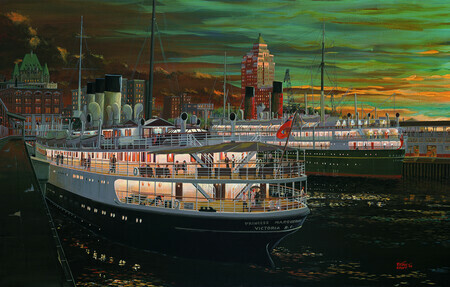 There was a time when majestic ocean-going passenger ships were the only way to reach the far corners of the Earth; this painting celebrates those golden years.

On the right is C.P.R.’s Pier B-C with the RMS “Aorangi” docked on her six-day layover in Vancouver. To the left is C.P.R.’s Pier D, with three-funneled “Princess Marguerite” adjacent. On the city’s left skyline looms the “new” Hotel Vancouver. Started in 1929 and horribly delayed by the Great Depression, the hotel is now being rushed to completion for the upcoming 1939 visit by King George VI and Queen Elizabeth. Thrusting skyward, the magnificent art deco Marine Building truly dominates Vancouver’s waterfront skyline.

C.P.R.’s BC Coastal S.S. Service “Princess Marguerite” was built in 1924-25. At 5,875 tons and 350 feet long, she offered exceptionally fine passenger accommodations on B.C.’s coastal waters. The much larger “Aorangi” was launched in 1924 and was operated by the Canadian Australasian Line. This 17,491 ton, 600 feet long liner was the world’s largest motor ship when she first nosed into Vancouver Harbour in 1925. The “Aorangi’s” route, Vancouver, Victoria, Honolulu, Suva, Auckland, Sydney, Australia, took roughly two months to complete as a round trip. Her sleek emerald green hull and red/black funnels became a familiar sight to Vancouverites.

1938 was a grand time for ocean travel and Vancouver’s commodious and sheltered harbour, Canada’s proud gateway to the Pacific, was an equally grand port. My painting “Bon Voyage, Vancouver Harbour – 1938” is intended to convey something of this sentiment with ocean going palaces glowing in the impending night. The brooding sky, however, needs some explanation; put simply, I have painted a calm-before-the-storm scene that, as events were to unfold, would never be repeated.

First to disappear from this scene, Pier D burned down on July 27 of that year and was never rebuilt. Then, the following year, war engulfed the world! Both the “Aorangi” and the “Princess Marguerite” disappeared from Vancouver harbour, both pressed into war service; their fates could not have been more different. Tragically, “Princess Marguerite” was torpedoed and sunk by a German submarine while on duty in the Mediterranean. The “Aorangi” however survived her extensive and distinguished service as a British Admiralty vessel and troop ship. She helped with the evacuation of Singapore, served as a depot ship for the D-day invasion and perhaps, most strategically, later operated as a mother ship for 12 submarines in the Pacific Theatre.

Following W.W.II there were many efforts to return things to normal. The “Aorangi” underwent a complete refit and was returned to her former passenger service on the Pacific. It would not last; W.W.II had accelerated the technical development of air travel to such an extent that the “Aorangi” could no longer compete profitably. On May 4, 1953 she sailed out of Vancouver harbour for the last time. Vancouverites watched in dismay: “we’ll never see the likes of that ship in this harbour again”, were the words heard over and over.

It would be many decades before such grand ships would reappear. Today’s new, larger cruise ships, although created for a different purpose, cleverly mimic the service and style from that golden moment in our past when ships like “Aorangi” and the “Princess Marguerite” graced Vancouver with their presence.