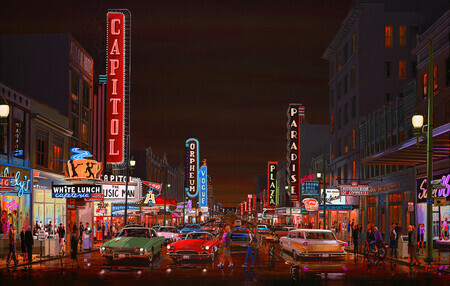 It has been a thrill to finish this project, a year and a half of research and painting. The easy part involved archived back issues of the Vancouver Sun’s entertainment section which provided the information on the entertainment scene, thus the movie titles that appear on the marquees are as accurate as possible. Including the cars, I used more than two hundred archived and web images to add detail upon tiny detail. I also used the 1962 Vancouver City Directory to identify the names of business on Granville thus allowing me to add signs and neon where even photographs do not exist.

In 1962 Granville Street had a mall-like array of businesses: men’s and ladies clothing, book shops, shoe stores, furniture stores, pharmacies, the Medical Arts Building, bowling alleys, dance halls, restaurants and specialty stores like Krack-A-Joke and I have tried to paint them all in their proper place. Two businesses, Harrison’s Ltd. at 834 Granville and Veno Credit Jewelers at 829 Granville had just closed by 1962 but I decided to keep their wonderful neon lights blazing in my painting. I painted the White Lunch restaurant with its unforgettable three dimensional and animated neon Tea Cup Sign which will bring back a flood of memories. It was such a delight to light-up Granville Street’s theatre marquees once again casting them against a brooding night sky and I simply couldn’t resist creating mirrored reflections in the pavement suggesting the recent passage of a September evening shower. I filled Granville Street with just a few of the classic cars that I always wanted to own but never could afford and included two BCHydro Brill trolley buses working in opposing directions. The sidewalks are a scene unto themselves; I created the lifeblood of the street by painting characters young and old. I included the legendary Vancouver street photographer, Foncie Pulice standing outside the Capital Theatre. For decades Foncie faithfully photographed us with his innovative “Electric Photograph” stand; many Vancouverites still have a photograph or two of themselves as they blinked-surprised in the glare of his flash bulb.

Yet this painting is just part of Vancouver’s night scene. The main nightspots like the Palomar Supper Club are in full swing. The Cave is featuring a full Broadway production of Those Damn Yankees. Upcoming acts at the Queen Elizabeth Theatre include Sammy Davis Jr., then Katherine Dunham in Bamboche and after that the Limelighters.

Eating out on Granville was great. Between Robson and Smithe were five restaurants, The White Lunch, Commodore Lunch and Cigar, Chris’ Sea Food Grill, Deans Roast Chicken and Mr. Mikes Sea Food. Just south across Smithe, the Aristocratic with its distinctive neon sign attracted long crowds after the shows. If you were heading home by car, the popular Aristocratic Drive-ins beckoned as did White Spot Drive-in a few miles south at Granville and 67th Avenue. White Spot was the place-to-go if you had serious late dining plans. It was a “must-do” kind of thing for performers and celebrities after The Cave, The Palomar and other showrooms closed. Jack Benny, Bing Crosby, Wayne and Schuster, Dennis Day, Mary Livingstone, Henry Mancini, Robert Goulet, Van Johnson, Dal Richards, Mel Torme and a host of others routinely gravitated to the south end of Granville for a taste of White Spot.

I hope these brush strokes take you back to that romantic time in your past when, with a special person by your side and ten bucks between you, Theatre Row on Granville Street was a night on the town. Brian Croft

Other paintings linked to this work are: